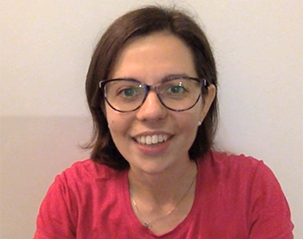 Raffaella Margutti obtained a PhD degree in Physics and Astronomy from the University of Milano Bicocca, Italy, in 2010, working on the broad-band (radio to gamma-ray) emission from relativistic jets in gamma-ray bursts within the Swift team. She then worked as a postdoctoral fellow at the Institute for Theory and Computation (ITC) at Harvard University, and then moved in 2015 for one year to New York University as James Arthur Fellow. Raffaella began a faculty position at Northwestern University (Physics and Astronomy) in 2016. She has been working in the field of Astronomical transients for more than a decade, with a wide range of expertise including, Stellar Explosions, Gamma-Ray bursts, Tidal Disruption Events, Stellar Outburst, and now, counterparts to GW.

Gravitational Waves are ripples in space-time that become particularly strong when very violent event in our Universe happen, like the merge of two very peculiar stars that we call neutron stars (NS). NS are what get left behind after a big star like 10 times the Sun ends its life with a big explosion. 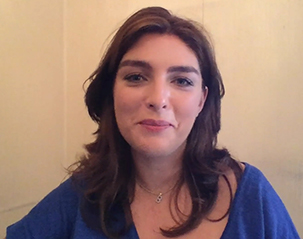 Eleonora Nora Troja was born and raised in Palermo, Sicily. After completing her PhD at the University of Palermo, she moved to NASA Goddard Space Flight Center as a NASA Postdoctoral Program Fellow. Her main research interest is the study of gamma-ray bursts, and in particular the connection between short duration gamma-ray bursts, neutron star mergers and gravitational waves. Beside her studies, she also leads the Swift Guest Investigator Program and serves as co-chair for the Athena mission working groups.

Gravitational waves are ripples in the fabric of space and time. According to Einstein’s theory of general relativity, every moving object actually emits a tiny amount of gravitational waves, but the signal is usually too small for us to detect. In order for us to detect gravitational waves, we need to wait for catastrophic events like the collision of two neutron stars. This brings to the second question, what are neutron stars? Neutron stars are some of the most exotic and dense objects in our Universe. These stars weight as much as our Sun but they are much smaller in size. A neutron star can extend up to 15-17 miles across, this is more or less the size of Washington D.C. 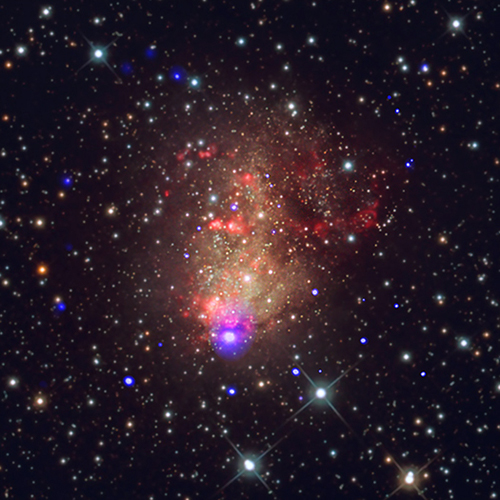 In 1887, American astronomer Lewis Swift discovered a glowing cloud, or nebula, that turned out to be a small galaxy about 2.2 million light years from Earth. Today, it is known as the "starburst" galaxy IC 10, referring to the intense star formation activity occurring there.

More than a hundred years after Swift's discovery, astronomers are studying IC 10 with the most powerful telescopes of the 21st century. New observations with NASA's Chandra X-ray Observatory reveal many pairs of stars that may one day become sources of perhaps the most exciting cosmic phenomenon observed in recent years: gravitational waves. 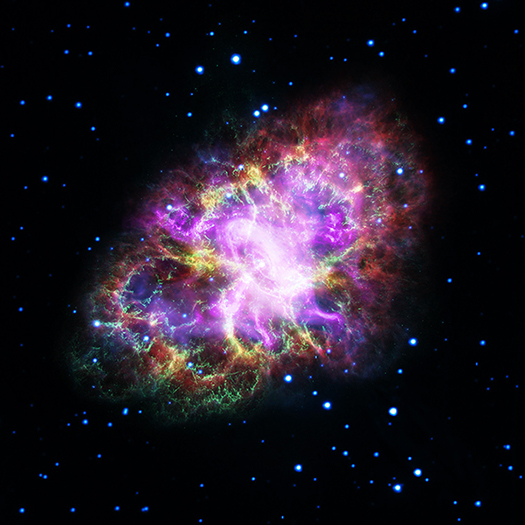 Astronomers have produced a highly detailed image of the Crab Nebula, by combining data from telescopes spanning nearly the entire breadth of the electromagnetic spectrum, from radio waves seen by the Karl G. Jansky Very Large Array (VLA) to the powerful X-ray glow as seen by the orbiting Chandra X-ray Observatory. And, in between, the Hubble Space Telescope's crisp visible-light view and the infrared perspective of the Spitzer Space Telescope.

The Crab Nebula, the result of a bright supernova explosion seen by Chinese and other astronomers in the year 1054, is 6,500 light-years from Earth. At its center is a super-dense neutron star, rotating once every 33 milliseconds, shooting out rotating lighthouse-like beams of radio waves and light — a pulsar. The nebula's intricate shape is caused by a complex interplay of the pulsar, a fast-moving wind of particles coming from the pulsar, and material originally ejected by the supernova explosion and by the star itself before the explosion.

We are very happy to welcome Dr. Arash Bahramian as our guest blogger. Dr. Bahramian completed his graduate studies at University of Alberta, Canada with Dr. Craig Heinke on X-ray binaries in globular clusters. After defending his PhD in 2016, he moved to Michigan State University to work with Dr. Jay Strader on study of black holes in globular clusters. He is the first author of the paper featured in our most recent press release.

Stellar mass black holes are formed by the deaths of massive stars. Like other black holes, these objects do not emit any light of their own, and astronomers try to identify them from their interactions with their environment. For example, in a close binary with another star, the black hole's strong gravity pulls material from the companion star. This material falls towards the black hole through a disk called an accretion disk. The massive release of energy due to infall of matter towards the black hole plus friction between particles in the disk, makes this disk extremely hot (about a million degrees Kelvin, roughly 200 times hotter than the surface of the Sun). This temperature is high enough to make the disk bright in X-rays, and so X-ray observatories like NASA's Chandra X-ray Observatory have been used to identify and study these systems. 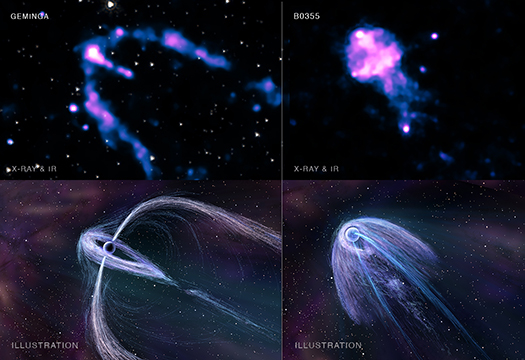 NASA'S Chandra X-ray Observatory has taken deep exposures of two nearby energetic pulsars flying through the Milky Way galaxy. The shape of their X-ray emission suggests there is a geometrical explanation for puzzling differences in behavior shown by some pulsars.

Pulsars - rapidly rotating, highly magnetized, neutron stars born in supernova explosions triggered by the collapse of massive stars- were discovered 50 years ago via their pulsed, highly regular, radio emission. Pulsars produce a lighthouse-like beam of radiation that astronomers detect as pulses as the pulsar's rotation sweeps the beam across the sky. 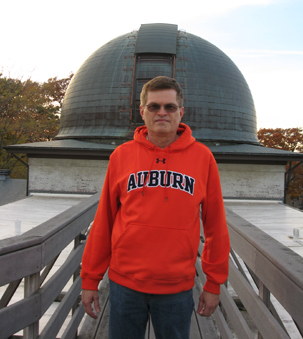 We are pleased to welcome Dr. Michael McCollough as our guest blogger. Dr. McCollough is the first author of a paper that is the subject of our latest press release. He has spent the last 30 years working with and analyzing data from astronomical radio, optical, X-ray, and gamma-ray telescopes. Currently, he serves as an Archival Astrophysicist at the Chandra X-ray Center in Cambridge, Mass.

Throughout my career I have been a multi-wavelength astronomer. To fully understand astronomical objects, one must look across the electromagnetic spectrum (from radio waves to gamma-rays). Also throughout my career I have been doing spacecraft operations. Starting with NASA’s Hubble Space Telescope (before, during, and after launch), ROSAT, NASA’s Compton Gamma-Ray Observations with the Burst and Transient Source Experiment (BATSE), and currently with NASA’s Chandra X-Ray Observatory. It was when I was working with BATSE that I was introduced to Cygnus X-3. Discovering that high-energy X-rays (as seen by BATSE) were correlated with emissions in the radio. 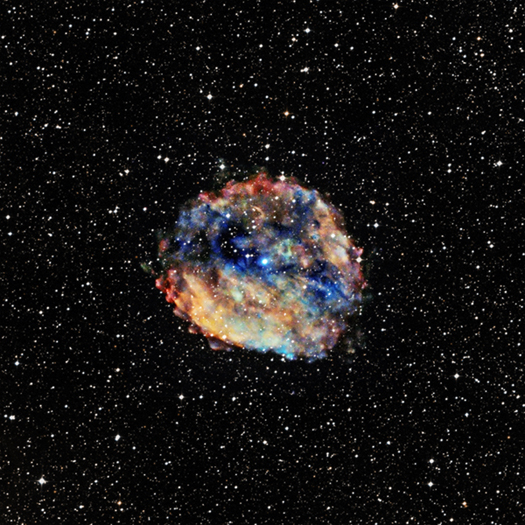 Using NASA's Chandra X-ray Observatory and other X-ray observatories, astronomers have found evidence for what is likely one of the most extreme pulsars, or rotating neutron stars, ever detected. The source exhibits properties of a highly magnetized neutron star, or magnetar, yet its deduced spin period is thousands of times longer than any pulsar ever observed. 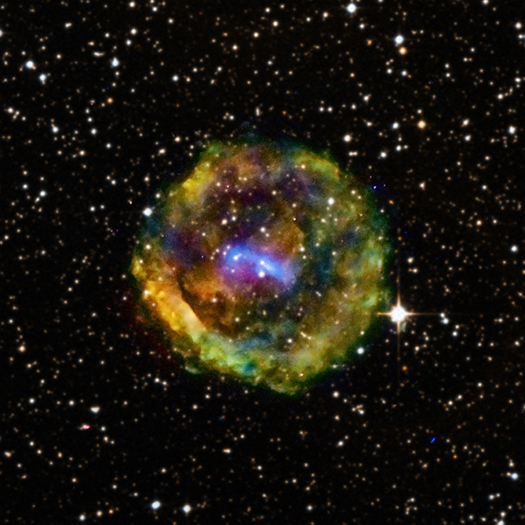 A new look at the debris from an exploded star in our galaxy has astronomers re-examining when the supernova actually happened. Recent observations of the supernova remnant called G11.2-0.3 with NASA's Chandra X-ray Observatory have stripped away its connection to an event recorded by the Chinese in 386 CE. 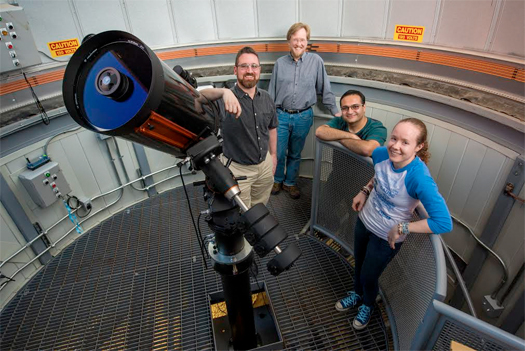