A White Dwarf and a Black Hole in a Tight Orbit

We are very happy to welcome Dr. Arash Bahramian as our guest blogger. Dr. Bahramian completed his graduate studies at University of Alberta, Canada with Dr. Craig Heinke on X-ray binaries in globular clusters. After defending his PhD in 2016, he moved to Michigan State University to work with Dr. Jay Strader on study of black holes in globular clusters. He is the first author of the paper featured in our most recent press release.

Stellar mass black holes are formed by the deaths of massive stars. Like other black holes, these objects do not emit any light of their own, and astronomers try to identify them from their interactions with their environment. For example, in a close binary with another star, the black hole's strong gravity pulls material from the companion star. This material falls towards the black hole through a disk called an accretion disk. The massive release of energy due to infall of matter towards the black hole plus friction between particles in the disk, makes this disk extremely hot (about a million degrees Kelvin, roughly 200 times hotter than the surface of the Sun). This temperature is high enough to make the disk bright in X-rays, and so X-ray observatories like NASA's Chandra X-ray Observatory have been used to identify and study these systems.

These findings motivated a broader search for stellar mass black holes in globular clusters, especially focusing on more massive, denser clusters, which might retain more black holes. One of these clusters is 47 Tucanae (47 Tuc, for short), a large cluster relatively nearby (around 14,800 light years away).

47 Tuc is a particularly interesting cluster as it contains dozens of stellar binaries, many of which are bright in X-rays due to the presence of an accretion disk around a compact stellar remnant (like a neutron star, white dwarf and perhaps a black hole). Similar to stellar mass black holes, white dwarfs and neutron stars are remnants of stars after death. However they have a surface and they emit light from the heat stored in their crust.

Previous X-ray studies of 47 Tuc have shown that it contains multiple binaries that are bright in X-rays. One of these X-ray bright binaries in 47 Tuc is referred to as X9. For a long time, it was thought that X9 is made up of a white dwarf pulling matter from a low mass Sun-like star. In 2015, Dr. Miller-Jones and collaborators observed strong radio emission from X9 indicating the presence of a black hole in this binary. They suggested that this might mean the system is made up of a black hole pulling matter from a white dwarf. 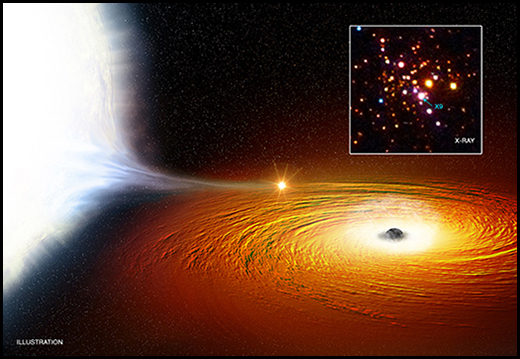 Illustration with inset X-ray image of X9 in 47 Tucanae

This finding motivated me, my PhD supervisor Dr. Heinke, and collaborators to try to study this system in more detail and try to determine the nature of the companion star — that is, whether it is a white dwarf or a Sun-like star or something else.

So we obtained observations with the Chandra and NuSTAR X-ray observatories, simultaneously with radio observations from the Australia Telescope Compact Array. Additionally, we also started looking into archival data obtained by Chandra.

In the archival Chandra data, we found a periodic variation in X-ray brightness of the system every 28 minutes, which is likely due to the orbital motion of the binary. Such a small orbital period means the distance between the black hole and the companion star is only 2.5 times the Earth-Moon separation. Such a separation is too small to fit any low mass Sun-like stars, so the only type of star that can fit into this orbit with a black hole is a white dwarf.

Furthermore, we were able to identify strong X-ray spectral lines produced by oxygen in this system. We performed simulations trying to imitate these lines and figure out how they are created. With our simulations, we were able to show that the black hole is embedded in a cloud of hot gas, largely containing oxygen. This was another strong piece of evidence for a white dwarf companion as normal stars are mostly made of hydrogen, but white dwarfs are the remnant cores of low mass stars and can have large amounts of helium, carbon or oxygen in their outer layers.

This was an exciting find, as we found compelling evidence that the companion is a white dwarf and furthermore could even show what the white dwarf is made of. Our findings showed X9 is the tightest binary possibly containing a black hole.

We might not be certain if the mysterious compact object pulling matter here is a black hole, but we are quite sure that the companion star is a white dwarf and that X9 is a close binary of two compact stellar objects. Also, if it indeed contains a black hole, maybe future gravitational wave observatories might be able to detect radiation from this fascinating binary.