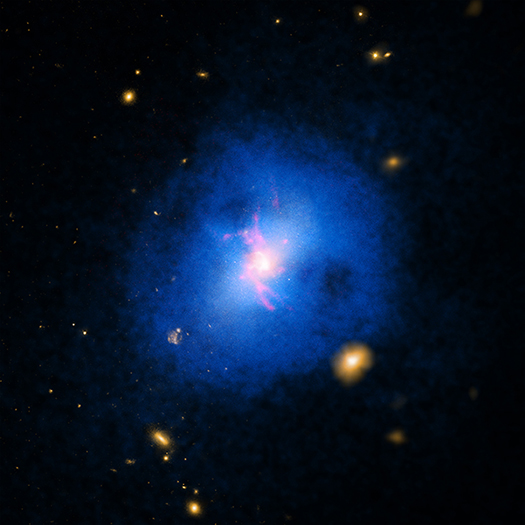 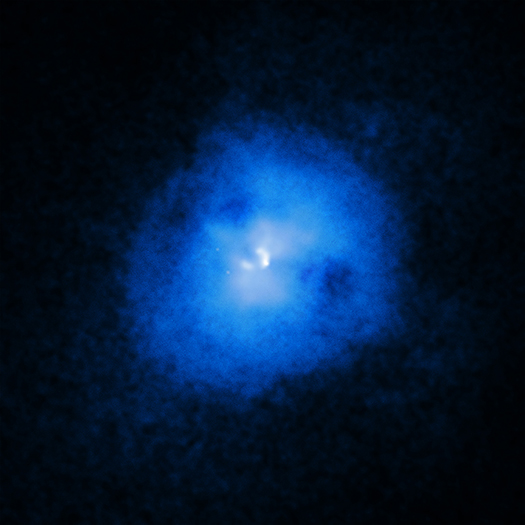 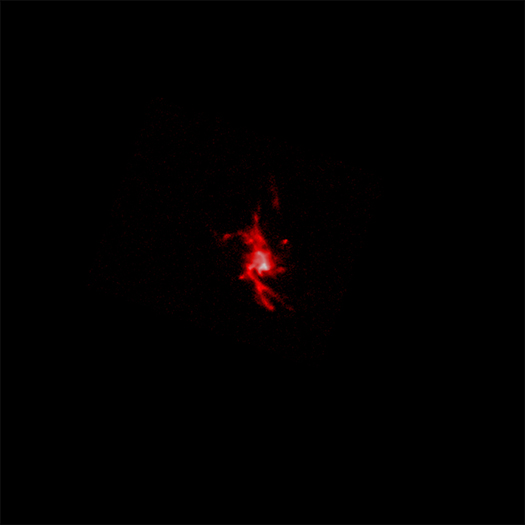 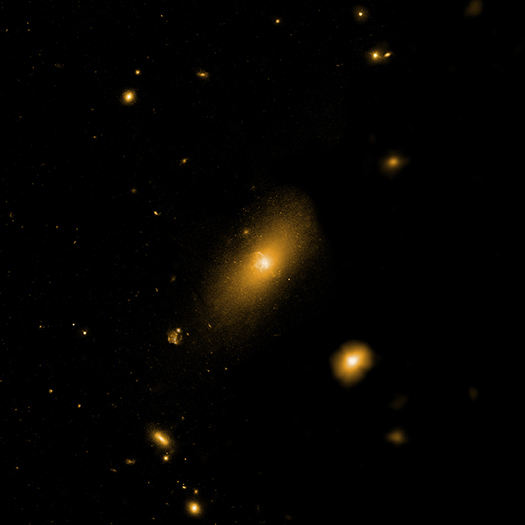 
This galaxy cluster comes from a sample of over 200 that were studied to determine how giant black holes at their centers affect the growth and evolution of their host galaxy, as reported in our latest press release. This study revealed that an unusual form of cosmic precipitation enables a feedback loop of cooling and heating, stifling star formation in the middle of these galaxy clusters.

Abell 2597, shown here, is a galaxy cluster located about one billion light years from Earth. This image contains X-rays from NASA's Chandra X-ray Observatory (blue), optical data from the Hubble Space Telescope and the Digitized Sky Survey (yellow) and emission from hydrogen atoms (red) from the Walter Baade Telescope in Chile.

According to this new study, the regulation of the largest black hole and their host galaxies works as follows: in some galaxies, such as NGC 2597, hot gas is able to quickly cool through radiation and energy loss, in a process called precipitation. The clouds of cool gas that result then fall into the central supermassive black hole, producing jets that heat the gas and prevent further cooling.

The researchers used Chandra data to estimate how long it should take for the gas to cool at different distances from the black holes in the study. Using that information, they were able to accurately predict the "weather" around each of the black holes.

They found that the precipitation feedback loop driven by energy produced by the black hole jets prevents the showers of cold clouds from getting too strong. The Chandra data indicate that the regulation of this precipitation has been going on for the last 7 billion years or more.

While a rain of cool clouds appears to play a key role in regulating the growth of some galaxies, the researchers have found other galaxies where the cosmic precipitation had shut off. The intense heat in these central galaxies, possibly from colliding with another galaxy cluster, likely "dried up" the precipitation around the black hole.

Evidence was also found, in a few galaxy clusters, that strong bursts of outflows from regions near the black hole may have temporarily shut down precipitation, but the heating is not strong enough to result in conduction. In these cases, further cooling of gas should occur and active precipitation should resume in a few hundred million years.

A pre-print of the Nature study by Mark Voit (Michigan State University), Megan Donahue (Michigan State), Greg Bryan (Columbia University), and Michael McDonald (Massachusetts Institute of Technology) is available online; the study builds on work by Voit and Donahue that was published in the January 20th, 2015 issue of The Astrophysical Journal Letters and is available online.

I can see how hard is NASA pushing through the facts to reveal the deepest mysteries of the Universe and the history of it s creation... Best of Luck

If a black hole collides with another, they do not disappear, study has shown they combine and become a single larger black hole.

What happens if two black holes devour each other will they disappear?

Thank you for this wonderful article. The theory of galaxy growth continues to fascinate and this seems to go a long way to explaining what prevents further growth, however, there is still a question of why the black hole can't absorb more matter preventing its runaway growth which confuses.
sincerely
John Orhan