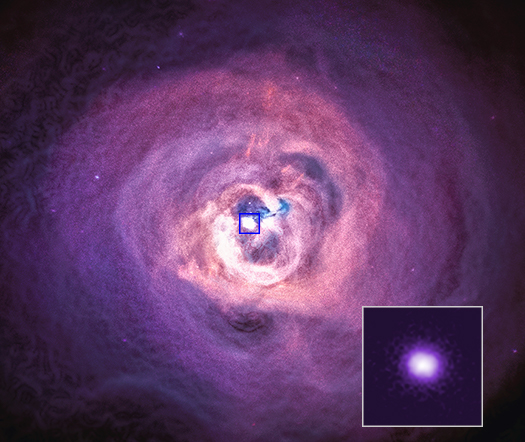 Astronomers using NASA's Chandra X-ray Observatory have made one of the first experimental tests of string theory, a set of models intended to tie together all known forces, particles, and interactions. As described in our latest press release, researchers used Chandra to look for signs of an as-yet undetected particle predicted by string theory. The lack of a detection in these Chandra observations helps rule out some versions of string theory.

The team looked for extraordinarily low-mass "axion-like" particles in the Perseus galaxy cluster, shown in a Chandra image in the main panel of this graphic (red, green and blue colors are low, medium and high X-ray energies respectively). Galaxy clusters, the largest structures in the Universe held together by gravity, offer an excellent opportunity to search for these particles. In a galaxy cluster, X-ray photons from an embedded or a background source can travel through a large amount of hot gas permeated with magnetic field lines. Some of the X-ray photons may undergo conversion into axion-like particles, or the other way around, along this journey. A simplified illustration shows this process, with shorter wavelength X-ray photons (in blue) converting into axion-like particles (yellow) and back to photons, as they travel across magnetic field lines (grey) in the cluster. Longer wavelength X-ray photons (red) are converting into axion-like particles, but not back into photons. Such conversions would cause a distortion in the X-ray spectrum (the amount of X-rays at different energies) of a bright or embedded source of X-rays.

Astronomers obtained a long Chandra observation, lasting over five days, of the central supermassive black hole in the center of the Perseus galaxy cluster (shown in the inset.) The spectrum of the region around the black hole showed no distortions, allowing the team to rule out the presence of most types of axion-like particles in the relatively low mass range their search was sensitive to.

Here the Chandra spectrum (red) of Perseus' central black hole shows the intensity of X-rays as a function of X-ray energy, along with an example (black) of a model X-ray spectrum predicted if axion-like particles were actually being converted from and into photons. To highlight the distortions that could have been detected, the data divided by the example model are also shown.

There has been a surge of interest in studies of these particles in recent years for three reasons: First, despite a lot of work, there continues to be no detection of Weakly Interacting Massive Particles (WIMPs), either with gamma-ray observations, or earth-based experiments that could explain the nature of dark matter. These particles are predicted to interact with normal matter only via the weak force, and have been considered to be one of the strongest candidates for dark matter. Secondly, scientists have realized that axions and axion-like particles are predicted by string theory. Finally, there are a large number of experiments or observations that can be done to search for these particles.

Animation & Video
A Tour of Chandra Data Tests "Theory of Everything"