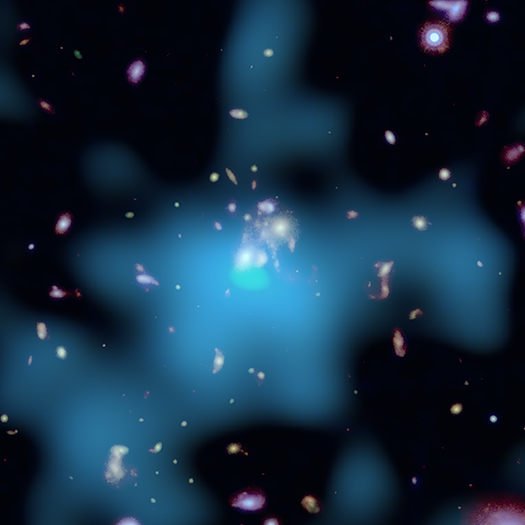 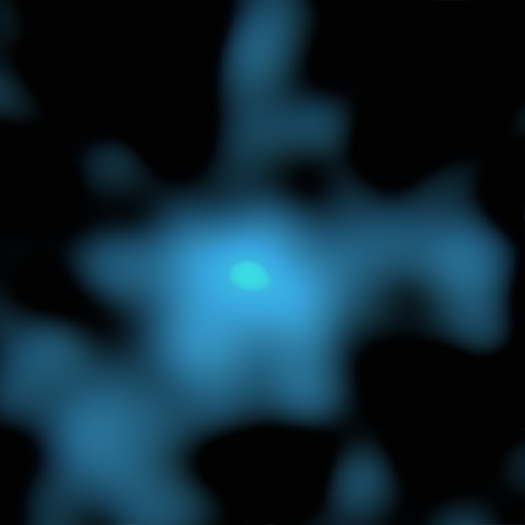 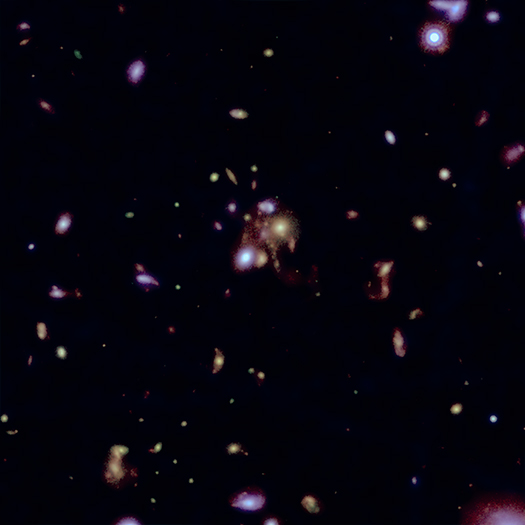 A galaxy cluster is demonstrating what can happen when a supermassive black hole stops being active, as described in our latest press release. SpARCS104922.6+564032.5 (SpARCS1049 for short) is a galaxy cluster located 9.9 billion light years away from Earth. Galaxy clusters contain hundreds or thousands of galaxies pervaded by hot, X-ray emitting gas that outweighs the combined mass of all the galaxies. In this image of SpARCS1049, X-rays from NASA's Chandra X-ray Observatory (light blue) have been combined with optical and infrared light data from NASA's Hubble Space Telescope (red, green, and blue).

However, the would-be domineering black hole in SpARCS1049 is behaving differently and is almost completely dormant. This appears to be allowing star formation to run rampant. According to observations from Hubble and NASA's Spitzer Space Telescope, SpARCS1049 is forming stars at a rate over 300 times our Milky Way galaxy. (At this rate of SpARCS1049, all of the stars in the Milky Way could form in just 100 million years, which is one percent of our Galaxy's age of more than 10 billion years.)

Researchers tried to determine what is causing this explosion of star formation and why it is located about 80,000 light years away from the center of SpARCS1049, outside any of the cluster's galaxies. The Chandra data show that the temperature of the gas in the site of prodigious star formation has cooled to about 10 million degrees. (This is in contrast to most of the rest of the cluster where the gas is hotter at about 65 million degrees.) The presence of this cooler gas suggests that other undetected gas reservoirs have cooled to even lower temperatures that enable huge numbers of stars to form.

An annotated version of the composite image shows the location of the densest hot gas seen with Chandra, along with the galaxy in the center of the cluster. The coolest gas detected by Chandra and the site of the most rapid star formation is located halfway between the densest gas and the central galaxy.

Astronomers do not see any signs that a supermassive black hole in the central galaxy is actively pulling in matter in SpARCS1049. For example, they do not find any evidence for a jet of material blowing away from the black hole at radio wavelengths, or of an X-ray source from the middle of the galaxy indicating that matter was heated as it fell towards a black hole. These are the common signs that a black hole is growing quickly and keeping the gas of a cluster too warm to form many stars. These black holes, however, are typically found in galaxy clusters that are only a few hundred million light years from Earth and are much older than SpARCS1049. This could mean that black holes in younger and more distant galaxy clusters act differently than their nearer and older counterparts.

Animation & Video
A Tour of SpARCS1049