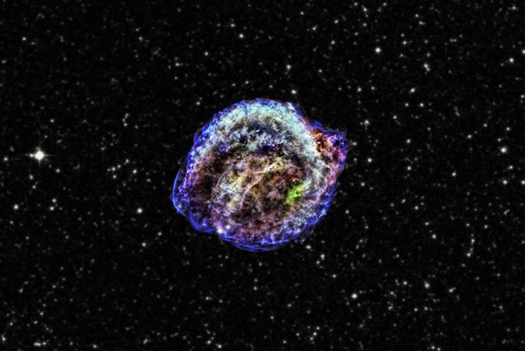 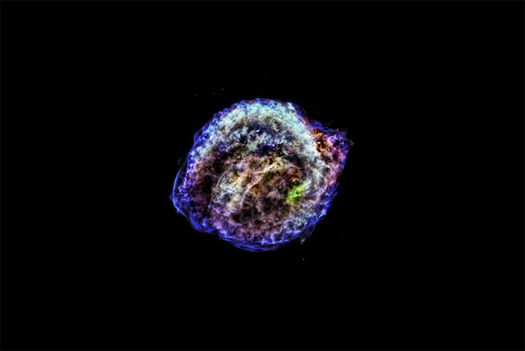 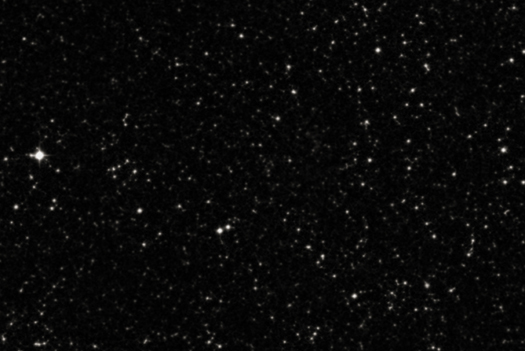 
This is the remnant of Kepler's supernova, the famous explosion that was discovered by Johannes Kepler in 1604. The red, green and blue colors show low, intermediate and high energy X-rays

As reported in our press release, a new study has used Chandra to identify what triggered this explosion. It had already been shown that the type of explosion was a so-called Type Ia supernova, the thermonuclear explosion of a white dwarf star. These supernovas are important cosmic distance markers for tracking the accelerated expansion of the Universe.

However, there is an ongoing controversy about Type Ia supernovas. Are they caused by a white dwarf pulling so much material from a companion star that it becomes unstable and explodes? Or do they result from the merger of two white dwarfs?

The new Chandra analysis shows that the Kepler supernova was triggered by an interaction between a white dwarf and a red giant star. The crucial evidence from Chandra was a disk-shaped structure near the center of the remnant. The researchers interpret this X-ray emission to be caused by the collision between supernova debris and disk-shaped material that the giant star expelled before the explosion. Another possibility was that the structure is just debris from the explosion.

The disk structure seen by Chandra in X-rays is very similar in both shape and location to one observed in the infrared by the Spitzer Space Telescope. This composite image shows Spitzer data in pink and Chandra data from iron emission in blue. The disk structure is identified with a label.

This composite figure also shows a remarkably large and puzzling concentration of iron on one side of the center of the remnant but not the other. The authors speculate that the cause of this asymmetry might be the "shadow" in iron that was cast by the companion star, which blocked the ejection of material. Previously, theoretical work has suggested this shadowing is possible for Type Ia supernova remnants.

The authors also produced a video showing a simulation of the supernova explosion as it interacts with material expelled by the giant star companion. It was assumed that the bulk of this material was expelled in a disk-like structure, with a gas density that is ten times higher at the equator, running from left to right, than at the poles. This simulation was performed in two dimensions and then projected into three dimensions to give an image that can be compared with observations. The good agreement with observations supports their interpretation of the data.

These results were published online and in the February 10th, 2013 issue of The Astrophysical Journal.

There are a lot of suggestions and that's the most exciting part but at the end which suggestion was the right the first that describe the power of a white dwarf or the second about the merging of two white dwarfs?

The more we know about the Universe, the more compromise we feel about our children education. There are a lot to learn.

Keep up the good job!

It is indeed mind boggling.Sometimes our vocabulary interferes with our understanding. You have great images. How do supernovae help to determine the acceleration of the Universe? Cheers.

The advances in Astronomical Observation in the last two decades have been nothing short of Incredible to me. We have come from fuzzy to incredibly detailed images of our Solar System to an entirely new set of windows into our Universe. The ability
to view via Orbiting Telescopes has resulted in dramatic changes re Cosmological Theories which might amaze even Carl Sagan and the Vintage SciFi authors such as Hinelin, Asimov, Clarke and others.
What marvelous wonders are yet to be discovered ? Welcome to the future Space Cadets !
Bob E

Thank you for your hard work and all of the images...keep going....