The young star, DG Tau, is located about 450 light years from Earth. Material can fall onto a developing star like this, known as a "protostar," from a surrounding disk. The interaction between this rotating disk and the nascent star leads to the narrowing of material into jets that blast away from the magnetic poles of the would-be star. Chandra can detect X-ray from these stellar jets, detected in X-rays by Chandra, which generate shock waves similar to those produced by supersonic jets. 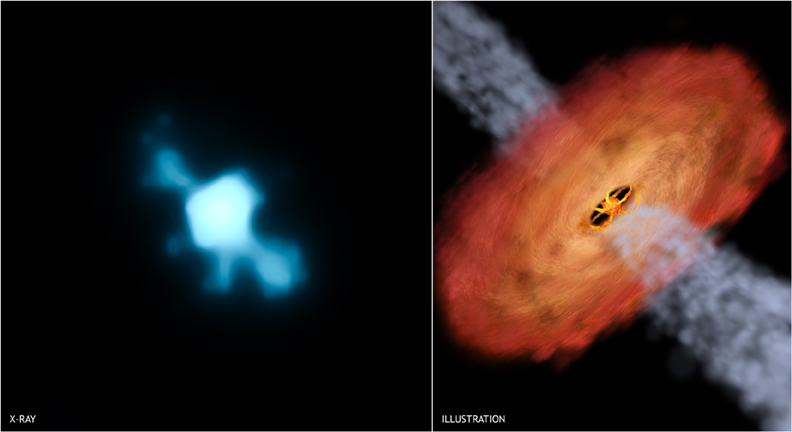 The image on the left from NASA's Chandra X-ray Observatory shows the first double-sided X-ray jet ever detected from a young star. A similar jet may have been launched from the young Sun and could have had a significant impact on the early solar system.

The young star, named DG Tau, is located in the Taurus star-forming region, about 450 light years from Earth. The bright source of X-rays in the middle of the image is DG Tau and the jet runs from the top left to the bottom right, extending to about 70 billion miles away from the star, or about 700 times the Earth-Sun separation.

An analysis of this image shows that the counter jet (top-left) has, on average, higher energy X-rays than the forward jet (bottom-right). The likely explanation is that some of the lower energy X-rays in the counter jet are absorbed by a disk around DG Tau, as shown in the accompanying illustration (right graphic), showing the star, disk and the inner regions of the jets.

Highly energetic X-rays are also detected from the young star, partially absorbed by streams of material flowing from the disk onto the star. The disk itself is much too cool to be detected by Chandra. Note that the faint vertical feature below the star does not show evidence for an additional jet, but is a chance alignment of four photons.

It is possible that powerful X-ray jets can develop at some stage during the evolution of most young stars. They could, for example, have existed during the early stages of the solar system. DG Tau has about the same mass as the Sun, but is much younger with an age of about one million years, rather than about 4.5 billion years. Since it is surrounded by a disk where planets may be forming, this Chandra image suggests that the early Earth and its environment may have been bathed in X-rays from a jet like DG Tau's.

Although it is unknown if such X-rays would have had a significant impact on the forming Earth, it is possible that they did more good than harm. By ionizing the disk the X-rays may have generated turbulence, which could have had a substantial effect on the orbit of the young Earth, possibly helping to prevent it from making a disastrous plunge into the Sun.Furthermore, X-ray irradiation of disks may also be important in the production of complex molecules in the disk that will later end up on the forming planets.

X-ray observations of X-ray jets add new features to the already complex story of star and planet formation. The ionization and heating power of the X-rays from jets will have to be included in future model calculations that will help scientists understand the physical evolution and chemical processing of environments that eventually lead to planets like those in our solar system.

This three-dimensional (3D) visualization is based on data from NASA’s Chandra X-ray Observatory. While unable to fly to such a distant object and zoom around it, astronomers can use such data to learn about the geometry, velocity, and other physical properties of the cosmic source.

Stars, like babies, make quite a fuss in their first days after birth. Protostars are stars in their youngest, “neonatal” stage and are typically marked by powerful X rays from plasma ten times hotter and 100 to 100,000 times brighter than the flares on our Sun.

According to current theories, material falls onto a developing star, known as a "protostar," from a surrounding disk. The interaction between this rotating disk and the nascent star leads to the narrowing of material into jets that blast away from the magnetic poles of the would-be star. These stellar jets, detected in X-rays by Chandra, generate shock waves similar to those produced by supersonic jets. Research compares 3D computer models with data from two young stars observed with Chandra.

- Download the 3D files (STL, OBJ, Rebuild Jets and Disk with Hole)
- Read the brief instructions below
- Select the 3D printer of your choice.

Make your own DG Tau system with a 3D printer of your choosing. Download the files and estimate the size you'd like to print at, as well as the color filament you'd like to use. For our 3D-printed example one color of black PLA filament was used. Support structures were required, and removed after printing by using a dissolvable substrate. Removing the support structure leaves the disk free to rotate (which also helps prevent breakage).

3D Print Your Own DG Tau