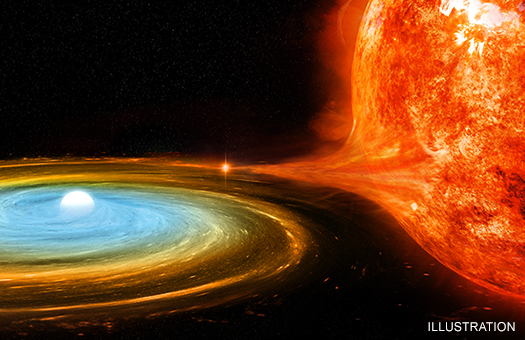 Astronomers have detected a bright X-ray outburst from a star in the Small Magellanic Cloud, a nearby galaxy almost 200,000 light years from Earth. A combination of X-ray and optical data indicate that the source of this radiation is a white dwarf star that may be the fastest-growing white dwarf ever observed.

In several billion years, our Sun will run out of most of its nuclear fuel and shrink down to a much smaller, fainter "white dwarf" star about the size of Earth. Because a mass equivalent to that of the Sun is packed into such a small volume, the gravity on the surface of a white dwarf is several hundred thousand times that of Earth.

Unlike our Sun, most stars including white dwarfs, do not exist in isolation, but instead are part of pairs called "binary systems." If the stars are close enough, the gravity of the white dwarf can pull matter away from its companion.

A new study based on observations with NASA's Chandra X-ray Observatory and Neil Gehrels Swift Observatory has reported the discovery of distinctive X-ray emission from a binary system containing a white dwarf called ASASSN-16oh. The discovery involves the detection of low-energy — what astronomers refer to as "soft" — X-rays, produced by gas at temperatures of several hundred thousand degrees. In contrast, higher-energy X-rays reveal phenomena at temperatures of tens of millions of degrees. The X-ray emission from ASASSN-16oh is much brighter than the soft X-rays produced by the atmospheres of normal stars, placing it in the special category of a supersoft X-ray source.

For years, astronomers have thought that supersoft X-ray emission from white dwarf stars is produced by nuclear fusion in a hot, dense layer of hydrogen and helium nuclei. This volatile material accumulated from the infall of matter from the companion star onto the surface of the white dwarf, and led to a nuclear fusion explosion much like a hydrogen bomb.

However, ASASSN-16oh shows there is more to the story. This binary was first discovered by the All-Sky Automated Survey for Supernovae (ASASSN), a collection of about 20 optical telescopes distributed around the globe to automatically survey the entire sky every night for supernovas and other transient events. Astronomers then used Chandra and Swift to detect the supersoft X-ray emission.

"In the past, the supersoft sources have all been associated with nuclear fusion on the surface of white dwarfs," said lead author Tom Maccarone, a professor in the Texas Tech Department of Physics & Astronomy who led the new paper that appears in the December 3rd issue of Nature Astronomy.

If nuclear fusion is the cause of the supersoft X-rays from ASASSN-16oh then it should begin with an explosion and the emission should come from the entire surface of the white dwarf. However, the optical light does not increase quickly enough to be caused by an explosion and the Chandra data show that the emission is coming from a region smaller than the surface of the white dwarf. The source is also a hundred times fainter in optical light than white dwarfs known to be undergoing fusion on their surface. These observations, plus the lack of evidence for gas flowing away from the white dwarf, provide strong arguments against fusion having taken place on the white dwarf.

Because none of the signs of nuclear fusion are present, the authors present a different scenario. As with the fusion explanation the white dwarf is pulling gas away from a companion star, a red giant. In a process called accretion, the gas is pulled onto a large disk surrounding the white dwarf and becomes hotter as it spirals toward the white dwarf, as shown in our illustration. The gas then falls onto the white dwarf, producing X-rays along a belt where the disk meets the star. The rate of inflow of matter through the disk varies by a large amount. When the material starts flowing more quickly, the X-ray brightness of the system becomes much higher.

"The transfer of mass is happening at a higher rate than in any system we've caught in the past," added Maccarone.

If the white dwarf keeps gaining mass it may reach a mass limit and destroy itself in a Type Ia supernova explosion, a type of event used to discover that the expansion of the universe is accelerating. The team's analysis suggests that the white dwarf is already unusually massive so ASASSN-16oh may be relatively close — in astronomical terms — to exploding as a supernova.

"Our result contradicts a decades-long consensus about how supersoft X-ray emission from white dwarfs is produced," said co-author Thomas Nelson from the University of Pittsburgh. "We now know that the X-ray emission can be made in two different ways: by nuclear fusion or by the accretion of matter from a companion."