What Makes an Astronomical Image Beautiful?

Astronomy is renowned for the beautiful images it produces. It's not hard to be impressed by an image like the Pillars of Creation or the Bullet Cluster, and the more eye-catching an image is, the bigger an audience it can potentially reach. So, as part of our job in astronomy outreach, we have each spent time thinking about what makes an astronomy image beautiful. As professionals, we’d like to go well beyond the intuition of the person who says, "I don't know anything about art, but I know what I like". One approach(1) is to list the key elements that make an image beautiful.

Lars Lindberg Christensen and collaborators have done just that, in an excellent paper in the most recent issue of the open journal "Communicating Astronomy with the Public". After years of experience working with images from the Hubble Space Telescope, they have defined a set of 6 criteria that are important in determining the appeal of an astronomical image. These 6 criteria are photogenic resolution (equivalent to the number of stars which can fit side by side across an image), definition (the amount of structure or contrast in an image), color, composition (how the object or objects of interest fill the field of view), signal-to-noise ratio, and how well instrumental artifacts have been removed.

For the photogenic resolution they define a quantity rphoto that is the number of effective resolution elements across the field of view (FOV). The equation is rphoto=FOV/θeffective, where θeffective is the effective angular resolution. A higher rphoto results in a better quality image. So one tactic is to push for a very large FOV by making a mosaic of a large number of adjacent images, as some amateur astronomers do, or as Chandra users did to make a large mosaic of the Carina Nebula. The other option is to use data from a telescope with a very small θeffective, where Hubble is unsurpassed at optical wavelengths and Chandra is unsurpassed at X-ray wavelengths. 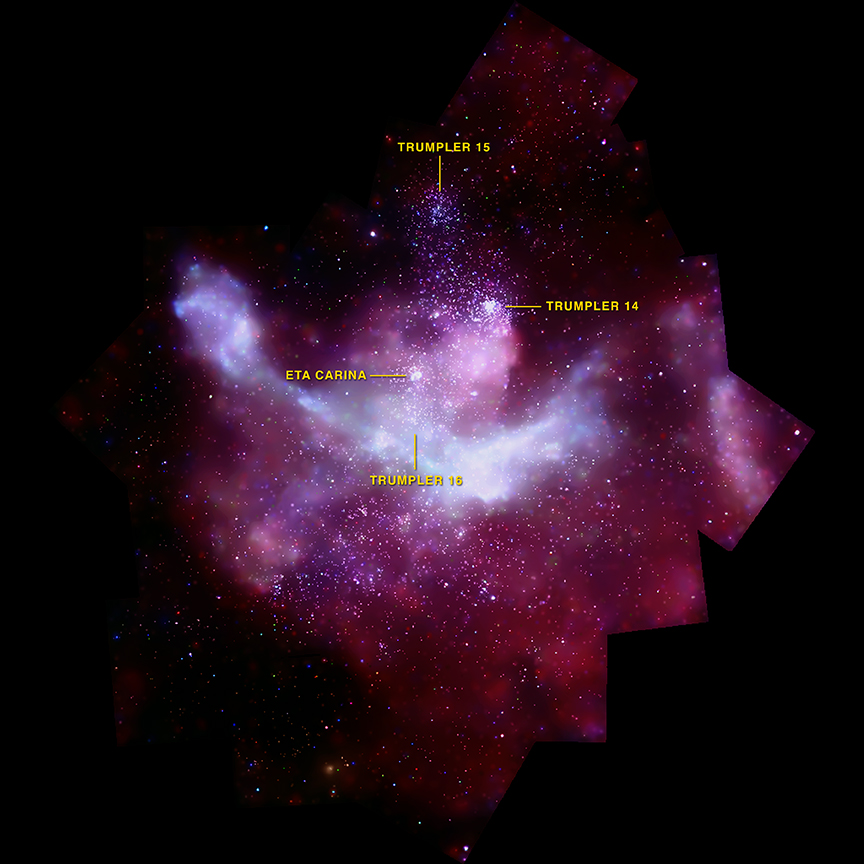 A mosaic of Chandra images of the Carina Nebula. Credit: NASA/CXC/PSU/L.Townsley et al.

The authors point out that the domain with high values of the photogenic resolution - between 1000 and 10,000 - was dominated for many years by Hubble, but that more recently other observatories such as Chandra, the MPG/ESO 2.2-meter telescope, the Canada France Hawaii Telescope and ESO's VISTA and VST telescopes have joined Hubble. We're happy to have been included in this elite group.

To make a color image using optical or infrared data, observations have to be made using different filters chosen in advance, such as B (blue), V (visual) and R (red). A color is then assigned to the image obtained with each filter – in this case blue, green and red are the obvious choices – and the images are combined to make a color image. With Chandra, the energy (or wavelength) of individual photons is recorded, so different wavelength ranges can be chosen afterwards, giving us extra flexibility in making an image. By picking out different wavelength ranges the same dataset can be used to show different features, so we can experiment to see what makes the most striking image, or the most useful one to explain a particular science result. The greatest flexibility with choosing different wavelength ranges comes when the signal-to-noise ratio is high.

This leads me to describe the main challenge for producing beautiful Chandra images: sometimes the signal-to-noise ratio isn't high. X-ray photons trace energetic events, such as regions close to a black hole, or the exploded guts of a massive star, but they tend to arrive from the cosmos in a trickle, rather than a flood. This limitation was most apparent early in the mission, when lots of different targets were observed and Chandra's observations usually involved short exposures. Later in the mission much deeper observations have been done, giving much higher signal-to-noise ratios and better images. For example, you can see the dramatic difference between these two images of the supernova remnant Cassiopeia A. The early Chandra image shown on the left had an exposure time of only 2 hours and doesn't look nearly as photogenic as a later image shown on the right, with an exposure time of 11 1/2 days.

The signal-to-noise ratio is connected to the 2nd criterion, the definition in an image. If the signal-to-noise ratio is low because few counts have been detected, then this can seriously limit the amount of detailed structure that you can see in an image. Think about how much detail you can see in a painting that is well lit, compared to looking at one in the dark. Again, deep exposures help a lot. The deep observation of Cas A has significantly sharper features and more complicated structure than the shallow one.

Only a limited number of very deep observations can be made with Chandra each year. This means there is intense competition between astronomers to convince the members of the Chandra Time Assignment Committee to approve any observing proposals requiring a lot of observing time. Therefore, the science case has to be particularly strong, which becomes an advantage for us, because it means that we can publicize interesting science at the same time as showing off beautiful new images.

When we have only low signal-to-noise X-ray data to work with, we sometimes combine it with optical or infrared images, to capitalize on the high signal-to-noise in these other wavelengths. This can give a striking image, such as in this view of NGC 602. 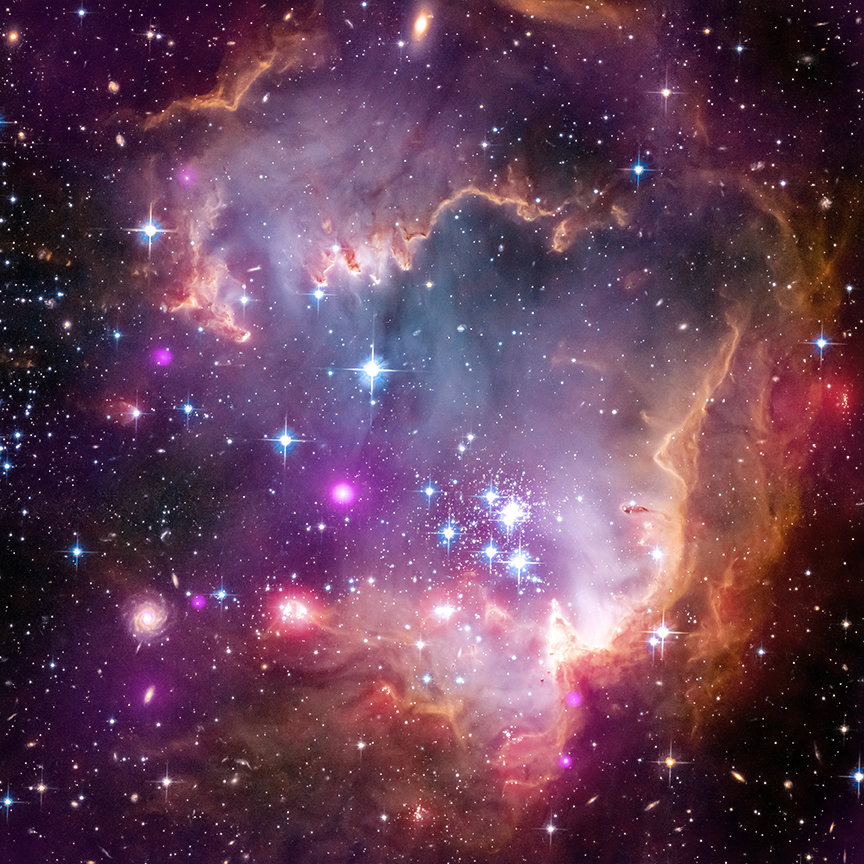 The final criterion is instrumental artifact removal, where the relatively low count rates for Chandra are an advantage. When you detect a lot of very bright objects you tend to accumulate a lot of artifacts, so optical observations can require a lot of clean-up work. According to Christensen et al., one to two hundred hours can be spent manually cleaning a large image. Chandra images aren't free of artifacts, but they're not as much of a problem.

In their conclusion, Christensen et al. explain that the ideal case is for all six criteria to be fulfilled, giving a great image. It’s still possible to produce a great image with less, but it becomes more difficult and compromises have to be made, as they note.

Having explained some of the factors that help us produce beautiful Chandra images, we invite you to explore our photo album of images.

(1): In this blog post I've discussed only one approach for thinking about how beautiful an image is. There are other approaches that consider aesthetics in general. My colleague Kimberley Arcand is involved in a project called "Aesthetics and Astronomy" which studies “the perception of multi-wavelength astronomical imagery and the effects of the scientific and artistic choices in processing astronomical data.”

Category:
Chandra Data: Behind the Scenes
Disclaimer: This service is provided as a free forum for registered users. Users' comments do not reflect the views of the Chandra X-ray Center and the Harvard-Smithsonian Center for Astrophysics.
Please note this is a moderated blog. No pornography, spam, profanity or discriminatory remarks are allowed. No personal attacks are allowed. Users should stay on topic to keep it relevant for the readers.
Read the privacy statement