Recently, I attended a memorial service for Geoffrey Burbidge, who was my thesis advisor many years ago. He was eulogized for his pioneering work in several fields of astrophysics. In the 1950's, he was the first to determine the enormous energies involved in the giant radio sources, calculations still used today in studying the process of black hole feedback in galaxy clusters. He and his wife Margaret were leaders in documenting violent events occurring in what they called active galactic nuclei, or AGN, as they are commonly called today. They also paved the way for work that eventually led to the conclusion that the universe is dominated by dark matter, a peculiar substance whose nature is still not understood. 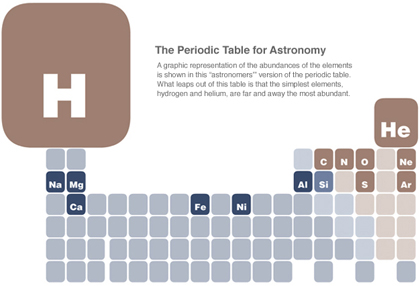 Geoff was best known for his work on ordinary, or baryonic, matter of the type that the stars, planets and people are made of. In a monumental 104-page paper published in 1957 with Margaret, Fred Hoyle and William Fowler entitled "Synthesis of the Elements in Stars," the authors described how stars synthesize nearly all the chemical elements heavier than hydrogen and helium, from carbon and iron to lead and uranium. This paper, generally agreed to be one of the most important papers ever in astrophysics, laid the foundation for a new kind of synthesis of astronomical observations with nuclear and particle physics, and paved the way for much of modern astrophysics and cosmology.

In the Introduction to the paper, which became known as "B2FH," after the initials of the last names of the authors, they state that their goal is to determine the "history of matter." This history is hidden in the abundance distribution of the elements, that is, the relative proportion of each element in the universe.

This suggests that the origin of the elements can be explained by processes in which the heavier elements are built up from the lighter ones, starting with hydrogen. This process is called nucleosynthesis. A wide variety of observations is consistent with a straightforward picture in the history of baryonic matter consisting of two phases, one lasting 20 minutes, and the rest lasting for 13.7 billion years and counting.

The universe started out with baryonic matter in its simplest form, hydrogen. In the first 20 minutes or so of the Big Bang, about 25% of the hydrogen was converted to helium. After that, the expanding universe cooled below the point where nuclear fusion could operate, and no evolution of matter could occur again until stars were formed a few million years later. Then the buildup of elements heavier than helium could begin in earnest.

The evolution of stars is characterized by a sequence of stages in which nuclear fusion reactions build up heavier elements and in the process supply energy to hold the star up against gravity. Ultimately, processed matter containing heavy elements is expelled into the interstellar medium either by stellar winds or by supernova explosions. One of the principle scientific accomplishments of Chandra has been to help unravel exactly how the enrichment by stellar winds and supernovas works on a galactic and intergalactic scale.

Subsequent generations of stars will be formed by gas enriched in these heavy elements. In this way, the evolution of matter, stars and galaxies are all inextricably tied together.

The message is simple and sobering. Things change. The elements, the bedrock of our existence, change. Impermanence rules. Stars are born, exist for a while –sometimes a very long while, but then they explode, implode or just slowly cool into obscurity.

Of course, on a personal level we knew this already. It is the ecstacy and agony of our existence. We are born, we live, we love, friends and loved ones die, and so do we.

At Geoff’s memorial, a colleague whom I had not seen for years, remarked, “People don’t really change that much, do they? They grow old, but the fundamentals are still there, you can tell they’re still the same person.“

Geoff certainly didn’t change. To the end, he steadfastly stuck to contrarian points of view on the Big Bang and related topics.

On a more personal level, he remained the gruff, intimidating presence, a mentor who guided me into X-ray astronomy, and got me my first job in astrophysics. Then, not long ago, when I was in the depths of despair, helpless to prevent a catastrophic change, he was one of the first to call and offer his support and consolation, even though he himself was ill.

Simple acts of kindness and consideration. They may not seem like much, but they can offer something of unchanging value as we struggle to cope with a changing universe.