Skipping Over The One Small Step

This week marks the 40th anniversary of Apollo 11's historic landing on the Moon, when human beings stepped on our favorite (and only) natural satellite for the first time. This will be in the news all week, so we thought it would be a good time to revisit Chandra's contribution to studying the Moon.

Back in 2003, scientists released some results of Chandra's observations of the Moon. For those of you who are familiar with X-rays from space, you probably know that they are produced from phenomena and sources that are really hot or energetic. And, you may also know that the Moon - a rocky, cold body with no apparent heat source of its own - is neither of those things. 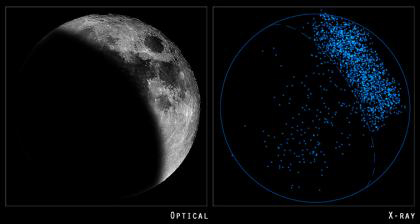 It turns out that the Moon can emit X-rays due to our other favorite object in the night sky: the Sun. When the Sun is particularly active, solar X-rays strike the lunar surface and cause electrons to be knocked out of the inner parts of the atoms, which puts those atoms into unstable states. Other electrons rush in to fill in the gaps of the evicted atoms and, in the process, convert their energy into fluorescent X-rays that Chandra detects (this is the same process that produces light in fluorescent lamps.)

This whole business turns out to be a completely independent way to get a handle for how much and what kinds of elements - like magnesium, silicon, oxygen, etc. - are on the surface of the Moon. So, while it might not be as dramatic as kicking up lunar dust with an astronaut's boot, we think it's still pretty cool.

(P.S. Some of you may be wondering why Chandra has only looked at the Moon once? Well, in order to get a good amount of data, the Sun has to be relatively active in its 11-year cycle. Solar activity has been on the decline since about 2002 so it has been less and less likely to get decent results using this technique. Predictions are the things will pick up with the Sun in the next several years.)