On February 17th, the Japanese Aerospace Exploration Agency (JAXA) launched a rocket into space with the X-ray Astronomy Satellite, also known as ASTRO-H, onboard.

Shortly thereafter, ASTRO-H separated from the spacecraft and deployed its solar panels. Operators then received data transmitted from the satellite and received at the Uchinoura ground station in Japan. All reports are that the satellite is currently in good health.

Following tradition, the spacecraft was renamed once it was successfully put into orbit and is now called Hitomi, which means "eye" in Japanese.

The Hitomi observatory is actually comprised of four telescopes: two Soft X-ray Telescopes and two Hard X-ray Telescopes. In scientific jargon, "soft" and “hard” refers to the energy bands of X-rays that Hitomi will detect. Each of the telescopes has an instrument fixed to the end of it to detect and record the light collected.

All four telescopes and their instruments aboard Hitomi observe objects simultaneously (the technical term for this is being "coaligned"). This is different from an observatory like Chandra that has one telescope and moves its two cameras, the Advanced CCD Imaging Spectrometer (ACIS) and High-Resolution Camera (HRC), and its two diffraction gratings, the Low and High Energy Transmission Gratings (LETG) and (HETG), into the path of the mirrors depending on the science of the observations. 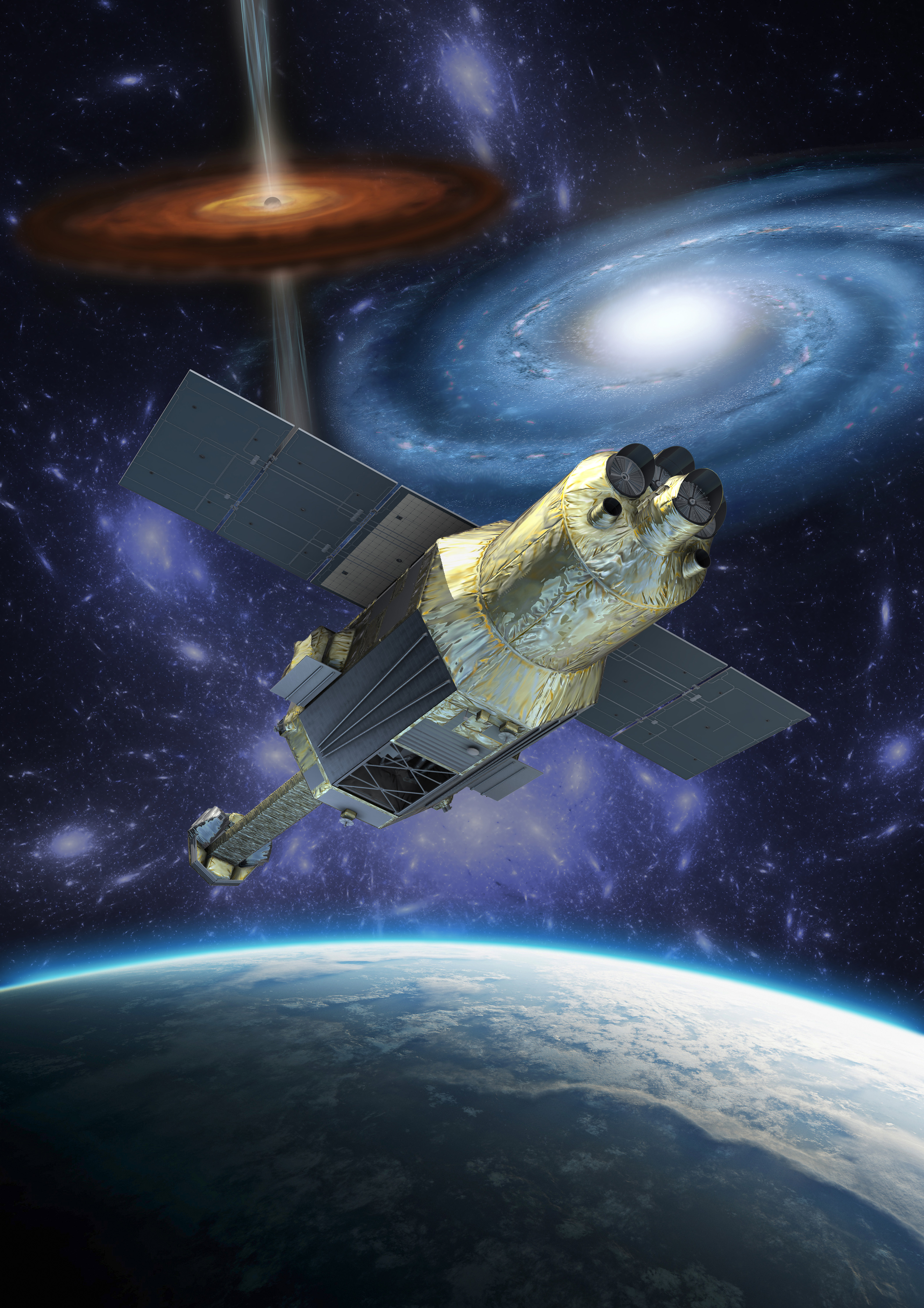 An artist's rendering of ASTRO-H in orbit. Credit: JAXA

Other features of Hitomi include:

* Hitomi's focus will be on making observations with high spectral resolution (ie the ability to distinguish different features in a spectrum with small separations in energy) over a wide range of wavelengths, ranging from 0.1 - 500 keV from very low-energy X-rays up to low-energy gamma rays. By comparison, Chandra observes X-rays from about 0.08 keV to about 10 keV.

* The Soft X-ray Spectrometer (SXS) is the first instrument of its kind in space, a high-resolution X-ray imaging spectrometer. The SXS’s spectral sensitivity is many times greater than that of any other X-ray observatory, although the image resolution (ie the abilty to distinguish different features in an image with small separation) is much lower than Chandra. Astronomers will combine Chandra’s precision images with Hitomi’s unique spectral data to understand the composition and flow of matter in a range of sources.

* The Hard X-ray Imager instrument focuses hard X-rays in the 5-70 keV band with a sensitivity and resolution similar to that of NASA's NuSTAR observatory.

* The other high-energy instrument is the Soft Gamma Ray Detector (SGD) that uses a new technology to reduce backgrounds in observations in the 50-500 keV range.

* Hitomi also has a Soft X-ray Imager (SXI) that uses CCD detectors like Chandra’s instruments. The SXI has a larger field of field but lower sensitivity and spatial resolution than Chandra.

Astronomers are very excited about the new capabilities that Hitomi will have such as:

* The SXS enables observations with the highest X-ray spectral resolution and sensitivity available on any kind of source, both point-like and diffuse (existing grating spectrometers like those aboard Chandra and XMM-Newton can only work on point sources). It will reveal motions of material in galaxy clusters and supernova remnants that previously were invisible, while also peering more closely into the accretion disks around black holes than has been possible to date.

* The four co-aligned telescopes and instruments cover an extremely wide range of X-rays, which gives observers the opportunity to study various high-energy processes occurring in a source simultaneously.

Over the coming months and years, we will undoubtedly be talking a lot about the exciting new science that Hitomi will be doing while working alongside Chandra. In the meantime, we want to take a moment to congratulate all of those who worked so hard on this project and recognize this exciting achievement. Welcome, Hitomi!