Dark Matter is Darker Than Once Thought 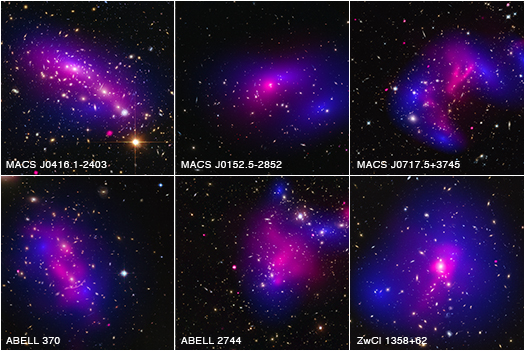 This panel of images represents a study of 72 colliding galaxy clusters conducted by a team of astronomers using NASA's Chandra X-ray Observatory and Hubble Space Telescope. The research sets new limits on how dark matter - the mysterious substance that makes up most of the matter in the Universe - interacts with itself, as reported in the press release. This information could help scientists narrow down the possibilities of what dark matter may be.

Galaxy clusters, the largest objects in the Universe held together by their own gravity, are made up of three main components: stars, clouds of hot gas, and dark matter. When galaxy clusters collide, the clouds of gas enveloping the galaxies crash into each other and slow down or stop. The stars are much less affected by the drag from the gas and, because they occupy much less space, they glide past each other like ships passing in the night.

Because the clouds of gas are very hot - millions of degrees - they glow brightly in X-ray light (pink). When combined with visible-light images from Hubble, the team was able to map the post-collision distribution of stars and also of the dark matter (blue). Astronomers can map the distribution of dark matter by analyzing how the light from distant sources beyond the cluster is magnified and distorted by gravitational effects (known as "gravitational lensing.")