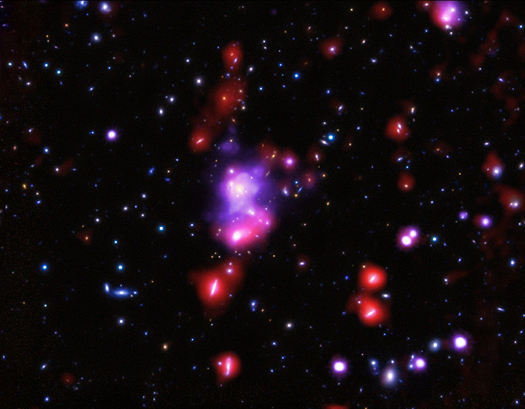 A newly discovered galaxy cluster is the most massive one ever detected with an age of 800 million years or younger. Using data from NASA's Chandra X-ray Observatory, astronomers have accurately determined the mass and other properties of this cluster, as described in our latest press release. This is an important step in understanding how galaxy clusters, the largest structures in the Universe held together by gravity, have evolved over time.

A composite image shows the distant and massive galaxy cluster that is officially known as XDCP J0044.0-2033. Researchers, however, have nicknamed it "Gioiello", which is Italian for "jewel". They chose this name because an image of the cluster contains many sparkling colors from the hot, X-ray emitting gas and various star-forming galaxies within the cluster. Also, the research team met to discuss the Chandra data for the first time at Villa il Gioiello, a 15th century villa near the Observatory of Arcetri, which was the last residence of prominent Italian astronomer Galileo Galilei. In this new image of the Gioiello Cluster, X-rays from Chandra are purple, infrared data from ESA's Hershel Space Telescope appear as large red halos around some galaxies, and optical data from the Subaru telescope on Mauna Kea in Hawaii are red, green, and blue.

Astronomers first detected the Gioiello Cluster, located about 9.6 billion light years away, using ESA's XMM-Newton observatory. They were then approved to study the cluster with Chandra in observations that were equivalent to over four days of time. This is the deepest X-ray observation yet made on a cluster beyond a distance of about 8 billion light years.

The long observing time allowed the researchers to gather enough X-ray data from Chandra that, when combined with scientific models, provides an accurate weight of the cluster. They determined that the Gioiello Cluster contains a whopping 400 trillion times the mass of the Sun.