Getting a Full Picture of an Elusive Subject 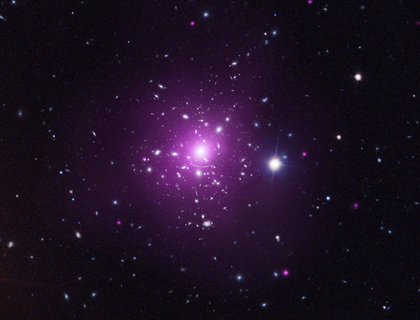 Two teams of astronomers have used data from NASA's Chandra X-ray Observatory and other telescopes to map the distribution of dark matter in a galaxy cluster known as Abell 383, which is located about 2.3 billion light years from Earth. Not only were the researchers able to find where the dark matter lies in the two dimensions across the sky, they were also able to determine how the dark matter is distributed along the line of sight.

Dark matter is invisible material that does not emit or absorb any type of light, but is detectable through its gravitational effects. Several lines of evidence indicate that there is about six times as much dark matter as "normal", or baryonic, matter in the Universe. Understanding the nature of this mysterious matter is one of the outstanding problems in astrophysics.

Galaxy clusters are the largest gravitationally-bound structures in the universe, and play an important role in research on dark matter and cosmology, the study of the structure and evolution of the universe. The use of clusters as dark matter and cosmological probes hinges on scientists' ability to use objects such as Abell 383 to accurately determine the three-dimensional structures and masses of clusters.

The recent work on Abell 383 provides one of the most detailed 3-D pictures yet taken of dark matter in a galaxy cluster. Both teams have found that the dark matter is stretched out like a gigantic football, rather than being spherical like a basketball, and that the point of the football is aligned close to the line of sight.

The X-ray data (purple) from Chandra in the composite image show the hot gas, which is by far the dominant type of normal matter in the cluster. Galaxies are shown with the optical data from the Hubble Space Telescope (HST), the Very Large Telescope, and the Sloan Digital Sky Survey, colored in blue and white.