This composite image shows a supernova within the galaxy M100 that may contain the youngest known black hole in our cosmic neighborhood. In this image, Chandra's X-rays are colored gold, while optical data from ESO's Very Large Telescope are shown in yellow-white and blue, and infrared data from Spitzer are red. The location of the supernova, known as SN 1979C, is labeled (roll your mouse over the image above). 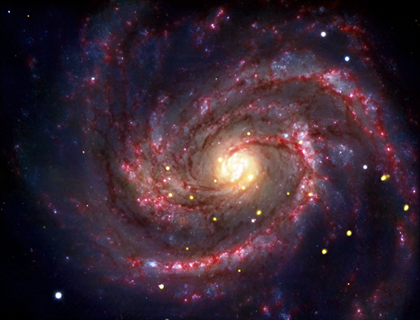 SN 1979C was first reported to be seen by an amateur astronomer in 1979. The galaxy M100 is located in the Virgo Cluster about 50 million light years from Earth. This approximately 30-year age, plus its relatively close distance, makes SN 1979C the nearest example where the birth of a black hole has been observed, if the interpretation by the scientists is correct.

Data from Chandra, as well as NASA's Swift, the European Space Agency's XMM-Newton and the German ROSAT observatory revealed a bright source of X-rays that has remained steady for the 12 years from 1995 to 2007 over which it has been observed. This behavior and the X-ray spectrum, or distribution of X-rays with energy, support the idea that the object in SN 1979C is a black hole being fed either by material falling back into the black hole after the supernova, or from a binary companion.