Chandra joins the Flickr Commons project with the Smithsonian

Not to give away my age, but I remember not too long ago using film when I took pictures. And then having (gasp!) to get them developed. It was a sad, sad world, but somehow we emerged into our current age of electronic enlightenment.

One of the greatest advantages of digital visualization, in my opinion, is the ability to share, comment on, and arrange images in a myriad of ways. And, of course, Flickr has been highly successful at taking these concepts to a new level.

Enter Flickr Commons, which is a forum created by Flickr for cultural institutions to share their photographic collections with the public. Earlier this summer, the Smithsonian Institution became the fourth to join, following the Library of Congress, the Powerhouse Museum, and the Brooklyn Museum (not shabby company, by the way.) 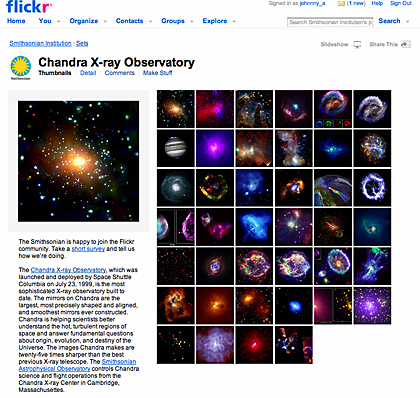 Above: Chandra image collection on Flickr. Currently about 40 images, it will soon be doubled to 80 images.

As of today, you can also find about 40 Chandra images on Flickr as part of the Smithsonian collection: http://www.flickr.com/photos/smithsonian/sets/72157608016866848/. (Chandra is a NASA mission, but the Smithsonian Astrophysical Observatory controls the science and flight operations from our headquarters here in Cambridge, Mass.) You can find images of just X-ray images from Chandra, as well as composites of X-rays with optical data from Hubble and infrared emission from Spitzer.

So the next time you get tired of looking at photos from your friendâ€™s latest trip to the Grand Canyon or wherever, jump over to Flickr Commons. Itâ€™s almost like going to a museum or a science center, but without having to pay admission or even do something as old school as walk around. And, if youâ€™re not careful, you may learn something.