There are some objects in space that are so photogenic that their images get circulated far beyond the regular confines of the astronomical community. NASA’s Hubble Space Telescope helped bring attention to the Cat’s Eye when its striking first image was released in 1994. Since then, Hubble has returned to the Cat’s Eye while other telescopes that detect different kinds of light — including NASA’s Chandra X-ray Observatory — have also observed it. 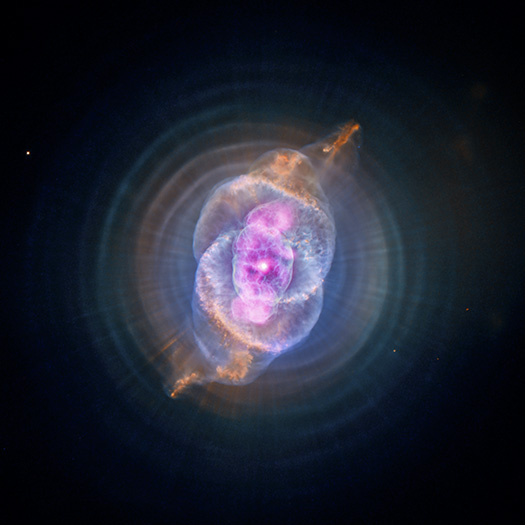 What is the Cat’s Eye? It is officially categorized as a planetary nebula, a misleading label that stuck from its origins in the 19th century. Because these objects look like planets through small telescopes, astronomers named them “planetary nebulas”.

Today, astronomers know these objects have little to do with planets. They are, in fact, a stage toward the end life of stars like our Sun. After the star uses most of its fuel, it puffs off its outer layers while the core shrinks to a stellar nub. Winds and radiation from the star’s core — known as a white dwarf — push and energize the discarded material, sometimes creating spectacular structures. The Cat’s Eye, also known more formally as NGC 6543 and apparently the name of a Stephen King movie from 1985, is a planetary nebula about 3,200 light years from the Earth in the direction of the Draco constellation.

Artist's depiction of the life cycle of a Sun-like star, starting as a main-sequence star at lower left then expanding through the subgiant and giant phases, until its outer envelope is expelled to form a planetary nebula at upper right.
Credit: ESO/S. Steinhöfel

In the nearly three decades since Hubble first released an image of the Cat’s Eye, much has changed. In addition to new data that has been acquired, technology outside of astronomy has advanced in many directions. In recent years, astronomers and astronomy visualization scientists have begun using three-dimensional platforms — including virtual reality (VR) and augmented reality (AR) — to explore astronomical datasets (see eg, Cas A, Crab Nebula, SN1987a).

With both interest and experience in this area, Dr. Kimberly Arcand, the Visualization Scientist and Emerging Technology Lead for Chandra, began looking into whether The Cat’s Eye was another object that could be transformed into these virtual spaces. Collaborating with a high school student as well as the Brown University-Chandra XR (extended reality) visualization team, the team took steps to move the model from its original 3D space into “extended reality,” which includes VR and AR.

In 2021, the project of creating the Cat’s Eye Nebula in virtual reality got a major jump start when Ryan Clairmont, then a high school student from Canyon Crest Academy in San Diego, won the “First Award” in Physics & Astronomy for the International Science and Engineering Fair with his submission “Evolution of the Cat’s Eye Nebula revealed through morpho-kinematic and hydrodynamical modelling”. After Arcand reached out to Ryan, she found he was willing to share his 3D version of the nebula based on acquired optical data and additional modelling. Preliminary tests were run by April Jubett (Chandra) to see if the model could be 3D printed for use in kits of 3D objects created with community members who are blind or visually impaired. Next, it went to Alex Dupuis (Brown) to add in relevant Chandra X-ray data, work on the skin/textures of the model, and add Hubble optical data of the background concentric rings. He then worked to bring it into the Aframe (an open-source web framework for VR) pipeline created with previous Brown University group members including Alexander Stewart and Elaine Jiang, and manager Tom Sgouros. After rounds of testing, the final result was revealed.

Making a VR/AR version of Cat’s Eye is more than just a challenge to tackle. Trying to make a Cat’s Eye with extended reality fits into the larger effort from the Chandra group to add to the traditional ways that astronomical data are presented. While images of space are the basis for most communication with nonexperts and experts, there are individuals and audiences that images may never reach. Moreover, there is active ongoing research into the educational benefits to sharing complex datasets in XR and the potential for increased learning gains.

There is still much to be investigated about the effect these kinds of XR projects have on learners of all ages, but it certainly seems promising as a way to provide an innovative way to explore astronomical data. The experts at the Chandra X-ray Center, along with their colleagues across NASA and other agencies, institutions, and universities, will continue to see where these new dimensions can take us next.