From High School to a High-Energy Discovery 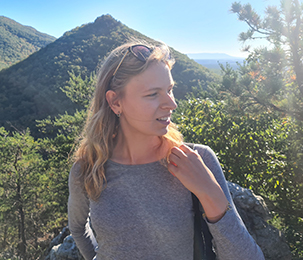 This blog post was written by Julia Berndtsson, a Swedish physics student currently in the third year of her undergraduate studies at Princeton University in the United States. For our latest Chandra result, she collaborated with Rosanne Di Stefano at the Center for Astrophysics | Harvard & Smithsonian during her last year of high school and through the first half of her freshman year at Princeton. She is currently exploring a range of topics in physics and engineering and works with Jason Petta's group at Princeton on developing semiconducting qubits.

When one imagines a scientist, a high school student usually isn’t the first thing that comes to mind. What people may or may not know is that there are multiple summer programs aimed at students still in their secondary education to gain exposure to research in their natural sciences, and it is because of such a program I ended up joining Dr. Rosanne Di Stefano in writing a paper on the discovery of the first planet candidate in an external galaxy.

The summer before my senior year, I was admitted to the Center for Excellence in Education’s Research Science Institute where participants were matched with a research mentor and given a project to be carried out over six weeks. Meeting Rosanne for the first time had me in awe. Not only did she give the students she took on her full confidence, but she would talk with excitement both about the topics that we were examining and over the fact that you were there to work on these problems too.

Those six weeks went by in the blink of an eye, and the learning curve was steep to say the least. Students in these programs naturally do not have much if any previous experience in the areas of the projects we are assigned, and with the guidance of Rosanne started the treading of a jungle of papers to give the lay of the land. Looking back, being given the confidence to be challenged is perhaps the experience in this project that I am most grateful for. When you’re barely eighteen years old, you do not expect to be able to contribute much to scientific work of any kind, and having someone you admire show their belief in you makes all the difference.

Towards the end of the summer we came upon a number of events in the data that stood out, and upon researching literature if anything had been written about these observations before there were several trails that intrigued us. In particular, there was an eclipse-like event for which an explanation existed — it was believed to be caused by a bump in the accretion disk of an ultraluminous x-ray binary — that had me hooked. There were too many unanswered questions. There were many observations of this source, so how come we didn’t see a bump in a relatively small disk many times? Was the bump in an accretion disk consistent with the parameters found when looking for cross-references? And, especially, how could we rule out that the eclipse was caused by this bump rather than an orbiting solid body such as a planet?

After the final presentation for the summer program was done Rosanne and I agreed to continue working together to resolve some of the questions that our data had raised. To me, this dip became a treasure hunt. If it couldn’t be explained by an eclipsing solid body, I was at least going to understand why. The following search consisted of deep dives into data archives, textbooks and research papers, and after some time enough had been gathered to make us take the possibility of a planet model more seriously.

Over the course of time, the group we were working with grew larger as different kinds of expertise were needed to answer the question we were investigating. The team not only came to be a collection of skilled people I could listen to and learn from, but wonderful colleagues with whom working sessions and meetings over Zoom would leave me even more motivated to work on our project. We turned our eclipse data inside out many times over, reasoning through any possible explanation that came our way, and after many months of work a clearer picture started emerging of what we were dealing with. Perhaps the eclipse could be a candidate planet after all.

If there is anything I have taken away from this experience, it is the value of the people you are working with. It would have been rather natural to have a high school intern carry out smaller must-do-tasks rather than letting them be part of the larger picture of the project, yet Rosanne and our team decided to take my perspectives seriously and trust my ability to learn-as-we-go. For anyone in academia reading this, I would encourage them to take on students who may not yet know all, but can grow into the role they are given -- not only are you getting an unexpected perspective on your work but you are creating a scientist that perhaps otherwise would not have been.

Category:
Neutron Stars/X-ray Binaries
Normal Galaxies & Starburst Galaxies
Disclaimer: This service is provided as a free forum for registered users. Users' comments do not reflect the views of the Chandra X-ray Center and the Harvard-Smithsonian Center for Astrophysics.
Please note this is a moderated blog. No pornography, spam, profanity or discriminatory remarks are allowed. No personal attacks are allowed. Users should stay on topic to keep it relevant for the readers.
Read the privacy statement