Behind the Story of the First Extragalactic Exoplanet Candidate 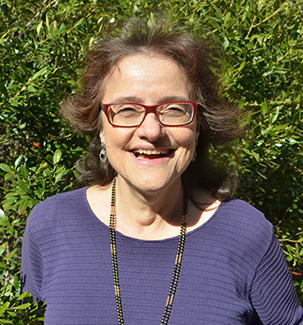 We welcome Rosanne Di Stefano, an astrophysicist at the Center for Astrophysics | Harvard & Smithsonian, as our guest blogger. Her work has encompassed a broad range of astronomical systems: stars interacting within dense stellar environments, the binary evolution of possible progenitors of Type Ia supernovae, X-ray astronomy, and gravitational microlensing. In this post, she writes about her team’s finding of a possible planet candidate in M51, which is featured in our latest press release.

The discovery of a candidate planet in M51 (nicknamed the “Whirlpool” galaxy) represents several firsts. Perhaps most important, it is the first candidate planet in a distant galaxy. Since the 1750s, it has been conjectured that the dim distant nebulas, now called galaxies, are island universes: large, gravitationally-bound stellar populations similar to our home, the Milky Way. Since the work of Edwin Hubble in 1929, we have been able to study stars in other galaxies. Our discovery of the planet candidate — in a binary system called M51 ULS-1 — gives us the first peek into external populations of planetary systems, extending the reach of planet searches to distances roughly ten thousand times more distant.

The candidate planet is understood to be in the “circumbinary” orbit of a compact object (either a neutron star or a black hole) and a donor star, meaning that the donor and compact orbit one another and that the candidate planet orbits the mass center of these two. (We call it a “donor” star because the compact object is pulling material from its surface and into a disk around the neutron star or black hole.) This makes the planet candidate in M51 ULS-1 the first found to be orbiting a high-mass star. In our own Galaxy, astronomers have discovered more than 4800 planets, but the stars they orbit are less massive than about four times the mass of our own Sun. Stars can be very much more massive, however. While the exact value of the largest possible stellar mass in today’s Universe remains uncertain, it is at least 100 solar masses. The donor star in M51 ULS-1 appears to have the luminosity and spectrum of a 20 to 30 solar mass star. 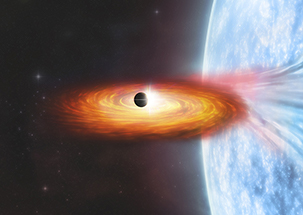 The numerous unique circumstances that surround this observation open up the possibility of both answering questions and asking new ones. How can we characterize planet formation in these high-energy systems? What might the evolution of planets in stable high-energy systems look like?

Every element in this string of firsts is related to the unique discovery method we employed. While transits of small portions of the copious optical light emitted by ordinary stars have led to the discovery of thousands of candidate planets, this is the first time X-rays are used to search for a real orbiting planet. The method works because the X-ray emitting region is small, comparable to the size of a planet. It can therefore be substantially or even totally blocked when a planet passes in front of it, producing a near-total or total eclipse.

Why has this advance been made now? The search for planets in the Milky Way was made possible because of advances in technology. For example, the first planets were found in the early 1990s through very small variations in the times at which pulses reached us from recently discovered fast-spinning neutron stars. Planets around stars with masses not-too-different from that of our Sun have been found because of advances in the precision with which we can measure stellar radial velocities and detect changes in flux.

We found the candidate planet in M51 simply because we looked for it. The technology was provided in place for about 20 years, with the launch of NASA’s Chandra X-ray Observatory and ESA’s XMM-Newton both in 1999. The total observational time needed for each galaxy is about 10 days, and about 10 galaxies have had that type of coverage. However, there had not been any published or well-known suggestions that planets could be found in X-ray light curves. The idea that they could be found made it important to conduct the search.

But the search itself is not something that is guaranteed success, not only because planets may not have been in orbit with X-ray binaries, but also because we need to be careful to rule out false positives and also to test the planetary model with care. The problem is akin to the one faced by the first generation of microlensing teams: to identify the needle of a possible planet from the haystack of other dimming events.

We have plans to look for planet candidates using this same X-ray transit technique in many other systems across different galaxies. We are looking forward to where this exciting result in M51 may lead next.

Category:
Neutron Stars/X-ray Binaries
Normal Galaxies & Starburst Galaxies
Disclaimer: This service is provided as a free forum for registered users. Users' comments do not reflect the views of the Chandra X-ray Center and the Harvard-Smithsonian Center for Astrophysics.
Please note this is a moderated blog. No pornography, spam, profanity or discriminatory remarks are allowed. No personal attacks are allowed. Users should stay on topic to keep it relevant for the readers.
Read the privacy statement