The Symbiosis of Powerful Quasar Jets and Their Bright Coronas 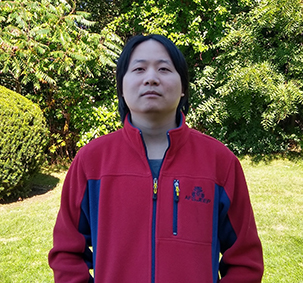 “So, the answer to the nature of the X-ray emission from radio-loud quasars is simpler than we previously had thought,” I said to myself after staring for a while at our new correlations between how bright radio-loud quasars are in X-ray and ultraviolet light.

The term “quasar” was originally coined for bright radio sources that look like stars in visible-light images, i.e., quasi-stellar radio sources. Shortly after their discovery, researchers realized that quasars are supermassive black holes (with masses of millions to billions of times that of the Sun) feeding on material that is gravitationally attracted to them. Notably, despite this strong gravitational attraction, some material can also be ejected in powerful jets, narrow streams of material shooting away from the supermassive black hole in opposite directions. These jets are fueled by material in an “accretion disk” falling towards the black hole.

These jets are bright in the radio band, producing the radio signal that attracted the attention of the first quasar researchers. It has been a puzzling fact, almost since the beginning of the quasar story, that not all actively feeding supermassive black holes launch powerful jets. In fact, we now know that the majority do not. Thus, over time, the term “quasar” has been generalized, now being used regardless of the presence of jets. Today, those quasars having powerful jets are called “radio-loud quasars”, while those lacking such jets are much fainter at radio wavelengths and thus are called “radio-quiet quasars”. 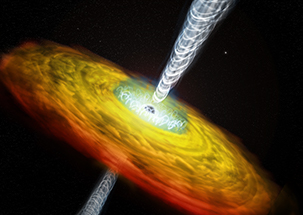 Two years ago, we initiated a project to study how the brightness of different radio-loud quasars in X-rays is correlated with their brightness in radio and ultraviolet light. Studying such correlations across the broad-band electromagnetic spectrum (that is, all types of light) often reveals essential physical processes. For example, it has long been known that the ultraviolet and X-ray light are correlated for radio-quiet quasars. Here, the ultraviolet light is radiated from the accretion disk, while the X-ray light is radiated from a “corona”, composed of hot magnetized plasma that lies above the accretion disk relatively close to the black hole. Such a correlation tells us that there is an interplay between the accretion disk and its corona in radio-quiet quasars.

Previous studies had performed similar analyses to ours, though using fewer radio-loud quasars and lower-quality data. We selected radio-loud quasars from the Sloan Digital Sky Survey and analyzed the intensity of light over a range of energy (this is what scientists call the “spectrum”.) For our study, we only kept those “typical” quasars that have characteristic blue emission in the visible and ultraviolet bands and strong signatures of emission from certain atoms in their spectrum. 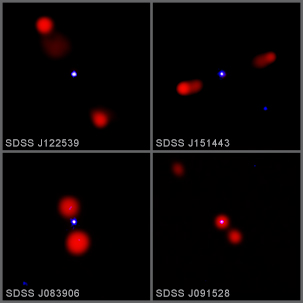 Four quasars from the team's sample with X-rays
from Chandra and radio waves from the VLA.

We used archival X-ray data from NASA’s Chandra X-ray Observatory, ESA’s XMM-Newton, and the earlier ROSAT mission (a joint German, US, and UK mission). Viewing angle is one important factor that affects a quasar’s electromagnetic spectrum and this is represented in the shape of the spectrum. We have used the spectral shape in the radio band to indicate the viewing angle. The radio spectrum is called “steep” if the radio signal decreases quickly with increasing frequency and is called “flat” otherwise. The radio-loud quasars with a steep spectrum are usually observed at relatively large viewing angles, where the jets are pointing away from us rather than close to our line of sight. The VLA Sky Survey of the National Radio Astronomy Observatory enables us to measure radio slopes for almost all of our radio-loud quasars, greatly surpassing the coverage of similar previous studies. The total data gathering and basic analysis at X-ray, ultraviolet, visible, and radio wavelengths was a large endeavor that took nearly a year, and our team was anxious to see what new insights would be revealed.

We had some basic expectations of what the results would look like based on a physical picture we had before initiating the project. It has been known since the 1980s that typical radio-loud quasars are brighter in X-rays than comparable radio-quiet quasars, because there is “extra” X ray light in radio-loud quasars. The amount of this extra X-ray light depends on the radio brightness. Naturally, we as well as many others thought that the extra X-ray light came from the base of the powerful jets, since the jets are the most distinctive attribute of radio-loud quasars. A link between the jet and corona was not typically part of this picture.

The emergent physical picture is, arguably, simpler than previously considered and also reveals novel insights about the jet-launching process. For example, we know that there must be physical differences between radio-loud and radio-quiet quasars that control the presence/absence of powerful jets. It has long been speculated that the black-hole spin plays such a role. Our results indicate that such differences are caused by processes in the immediate vicinity of the black hole, the same region where the X-rays are produced. More powerful quasar jets are generally launched from the supermassive black holes that are surrounded by X-ray brighter coronas. The apparent symbiotic link of these two components points to the central role of the magnetic field for both jet launching and corona production.