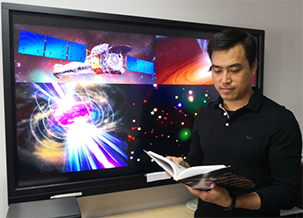 We are pleased to welcome Yongquan Xue, a professor at the Department of Astronomy, University of Science and Technology of China (USTC), as a guest blogger. He is an astrophysicist whose main research field is X-ray high-energy astrophysics, and has been significantly involved in the Chandra Deep Fields. Yongquan led the Nature paper that is the subject of our latest press release on the discovery of a magnetar-powered X-ray transient. Before joining USTC in 2012, he worked at Penn State University as a postdoc, after obtaining his astrophysics B.S. and M.S. degrees at Peking University, and Ph.D. degree at Purdue University, respectively.

A neutron star is the compact object formed after a supernova explosion occurring in the late evolutionary stage of a massive star, and it is one of the most mysterious objects in the universe. It is composed of almost all neutrons, and has some extreme physical properties such as ultra-high density and a super-strong magnetic field. It is an excellent natural laboratory for testing basic physical laws. However, up to now, our understanding about the basic properties of neutron stars (e.g., the equation of state, which describes the relation among pressure, density, etc.) is still relatively vague.

Whether the direct outcome of a binary neutron-star merger can be a neutron star, rather than the “favorite” product of a black hole, has not been determined for years. Some theoretical studies predict that if the neutron-star equation of state is sufficiently stiff, that is, if the pressure increases sharply with the increase of nuclear density towards the center of the star, there should be at least some binary neutron-star mergers that would leave behind supramassive millisecond magnetars (see Figure 1) or even stable neutron stars. A supramassive neutron star is more massive than a typical neutron star and a magnetar has a magnetic field strength over 10^14 - 10^15 Gauss. 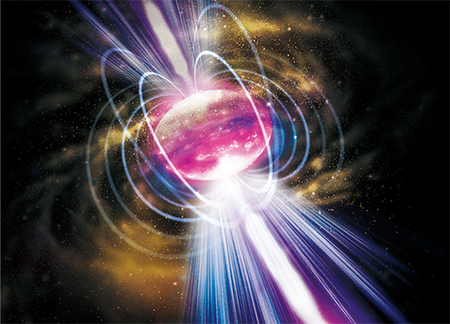 Figure 1: Artist's impression of a magnetar as the aftermath of a binary neutron-star merger (courtesy of Guoyan Wang and Cong He).

Because the X-ray radiation powered by such a post-merger magnetar essentially radiates evenly in all directions, we would expect to see an X-ray transient (i.e., a source that appears only for a short duration) that has no corresponding gamma-ray burst and has a characteristic light curve, if our viewing angle is not looking down the axis of the magnetar jet. (A “light curve” is a plot that shows how light from an object varies over time.) However, such sources had never been found until now.

We have recently discovered a new X-ray transient (dubbed CDF-S XT2, or XT2 for short) in the 7-million-second Chandra Deep Field-South (7Ms CDF-S), the deepest and most sensitive X-ray survey so far. The X-ray emission from XT2 lasts only about 7 hours, and the redshift of its host galaxy is 0.738, corresponding to a distance of about 6.6 billion light years away from us.

The observational data and theoretical analyses show that: (1) XT2 has no gamma-ray detection. (2) XT2 has a characteristic light curve -- a plateau plus a sharp decrease (see Figure 2, Top left), which is in perfect agreement with the theoretical predictions of X-ray emission from post-merger supramassive millisecond magnetars. (3) XT2 is located at the outskirts of its host galaxy (see Figure 2, Top right), which is consistent with the scenario of binary neutron stars being "kicked out" to the galaxy outskirts by the asymmetric counterforce of supernova explosions; furthermore, the probability that XT2 originates from the merger of binary compact stars, based on the physical properties of its host galaxy, is very high. (4) When the estimated event occurrence rate density of XT2-like transients is revised to the value expected in the local universe, it agrees with the value robustly derived from the first gravitational-wave detection (i.e., GW170817) of a binary neutron-star merger, which further supports a binary neutron-star merger origin for XT2. All the above arguments indicate that XT2 is very likely the first detected X-ray transient that is powered by a magnetar as the aftermath of a binary neutron-star merger, with no corresponding short gamma-ray burst.

The discovery of XT2 verifies the previous theoretical predictions that the direct product of a binary neutron-star merger can be a supramassive millisecond magnetar. It also places strong constraints upon the basic physics regarding neutron star equation of state (i.e., must be stiff enough) and ultra-high magnetic field strength (i.e., greater than 10^14 - 10^15 Gauss), by eliminating a number of soft equation-of-state models of nuclear matter. This deepens our understanding of the basic properties of neutron stars. Finally it provides a new perspective to study binary neutron-star mergers and neutron stars themselves.

For more information, see: A New Signal for a Neutron Star Collision Discovered