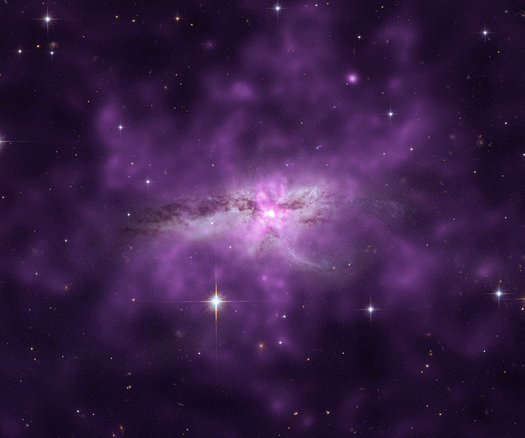 Scientists have used Chandra to make a detailed study of an enormous cloud of hot gas enveloping two large, colliding galaxies. This unusually large reservoir of gas contains as much mass as 10 billion Suns, spans about 300,000 light years, and radiates at a temperature of more than 7 million degrees.

This giant gas cloud, which scientists call a "halo," is located in the system called NGC 6240. Astronomers have long known that NGC 6240 is the site of the merger of two large spiral galaxies similar in size to our own Milky Way. Each galaxy contains a supermassive black hole at its center. The black holes are spiraling toward one another, and may eventually merge to form a larger black hole.

Another consequence of the collision between the galaxies is that the gas contained in each individual galaxy has been violently stirred up. This caused a baby boom of new stars that has lasted for at least 200 million years. During this burst of stellar birth, some of the most massive stars raced through their evolution and exploded relatively quickly as supernovas.

The scientists involved with this study argue that this rush of supernova explosions dispersed relatively high amounts of important elements such as oxygen, neon, magnesium, and silicon into the hot gas of the newly combined galaxies. According to the researchers, the data suggest that this enriched gas has slowly expanded into and mixed with cooler gas that was already there.