Nearby Supernova Factory Ramps Up 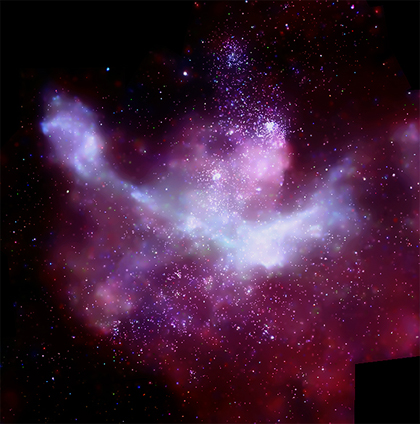 This large Chandra image shows the Carina Nebula, a star-forming region in the Sagittarius-Carina arm of the Milky Way a mere 7,500 light years from Earth. Chandra's sharp X-ray vision has detected over 14,000 stars in this region, revealed a diffuse X-ray glow, and provided strong evidence that massive stars have already self-destructed in this nearby supernova factory.

The lower energy X-rays in this image are red, the medium energy X- rays are green, and the highest energy X-rays are blue. The Chandra survey has a large field of 1.4 square degrees, made of a mosaic of 22 individual Chandra pointings. In total, this image represents 1.2 million seconds -- or nearly two weeks -- of Chandra observing time. A great deal of multi-wavelength data has been used in combination with this new Chandra campaign, including infrared observations from the Spitzer Space Telescope and the Very Large Telescope (VLT).

Several pieces of evidence support the idea that supernova production has already begun in this star-forming region. Firstly, there is an observed deficit of bright X-ray sources in Trumpler 15, suggesting that some of the massive stars in this cluster were already destroyed in supernova explosions. Trumpler 15 is located in the northern part of the image, as shown in a labeled version, and is one of ten star clusters in the Carina complex. Several other well known clusters are shown in the labeled image .