This image shows the symbiotic system known as CH Cyg, located only about 800 light years from Earth. The large image shows an optical view of CH Cyg, using the Digitized Sky Survey, and the inset shows a composite image containing Chandra X-ray data in red, optical data from the Hubble Space Telescope (HST) in green, and radio data from the Very Large Array (VLA) in blue. 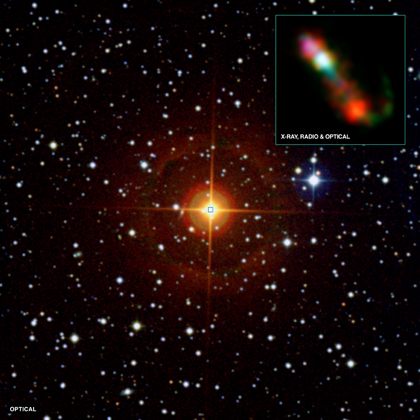 CH Cyg is a binary star system containing a white dwarf that feeds from the wind of a red giant star. The material from the wind forms a hot accretion disk around the white dwarf before crashing onto the star. CH Cyg is one of only a few hundred symbiotic systems known, and one of the closest to the Earth. Symbiotic systems are fascinating objects, where the components are codependent and influence each other's structure, daily life, and evolution. They are likely progenitors of bipolar planetary nebulas and they could make up some of the systems that later explode as Type Ia supernovas, spectacular explosions visible across cosmological distances.

The image in the inset shows a recent powerful jet in CH Cyg, caught in action by Chandra, HST and VLA. The material in the jet is moving with a speed of over three million miles per hour and is powered by material spinning in the accretion disk around the white dwarf. The detailed structure of the X-ray jet is seen for the first time in this system, showcasing the superb high-resolution capabilities of Chandra. The curved appearance of the jet, shown in the optical by the green arc in the lower right part of the inset, reveals evidence that the direction of the jet rotates. This precession may be caused by wobbling of the accretion disk, in a manner similar to a spinning top. Clumps in the outer jet, seen in X-rays, optical and radio data, provide evidence for powerful mass ejections by the jet in the past, and for interactions with shells of gas formed by the red giant. The jet can be seen as close as 20 astronomical units (AU) from the binary system, where one AU corresponds to the average distance from the Earth to the Sun. The jet extends out to distances as large as 750 AU from the binary, which is about 20 times the distance between the Sun and Pluto.