Thanksgiving Prep: Preheat at 90 for 15 minutes

John Scott is a mission planner for Chandraâ€™s Flight Operation Team, and from time to time provides an inside look for the outside world on just how people take care of this remarkable spacecraft. This entry has a bit of a mystery in the second half of the title. If you have a guess to what it means to "Preheat at 90 for 15 minutes," then post it to the comment section. (Note to the rest of the Flight Ops Team: you're not eligible!) If someone comes up with the right answer â€“ or close to it â€“ weâ€™ll send you a Chandra poster.

As most of the nation will spend the Thanksgiving holiday devouring a stuffed turkey in the warmth of their dining room, the Chandra X-ray Observatory will give thanks for the three batteries that will keep it powered during the first day of its 22nd eclipse season. With only three and a half weeks of eclipses (eight eclipses total), this season will be brief when compared to the upcoming eclipse seasons in the following few years.

The observatory experiences two eclipse seasons per year in which the Earth blocks the Sun and its potent solar energy from Chandra's six solar arrays. While the spacecraft is fully prepared for this upcoming eclipse season, it took the effort of an entire team to make it so. Chandra's Flight Operations Team, located in Cambridge, Massachusetts, spends many hours on analysis and preparing the spacecraft for its cold trip through the sunless sky. 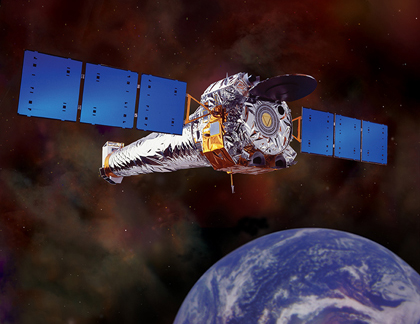 It all begins with the team's Electrical Power Subsystem engineer. He spends the few months leading up to the eclipse season using advanced tools to predict the length of each eclipse, determining whether the eclipse will require additional, commanded-on equipment, and preparing procedures for the spacecraft operators in case of an eclipse emergency. Simultaneously, the team's Deep Space Network (DSN) schedulers negotiate specific communications time on any of the six available JPL stations so that the teamâ€™s spacecraft operators can watch the live telemetry as the spacecraft traverses through the eclipse. In the weeks leading up to each eclipse, the team's Mission Planners configure the daily loads (a time-based series of commands that drive the spacecraft in its daily operations) to position Chandra's telescope and solar array axes normal to the sun-line and include commanding to configure the spacecraft for the eclipse. A day prior to the first eclipse, the spacecraft operators perform commanding to enable onboard contingency protection that will execute preapproved commands in the case of an emergency, even if the team is not in communication with the spacecraft. Two days prior to each eclipse, the onboard daily loads set timers that tell the onboard computer the duration of each eclipse. 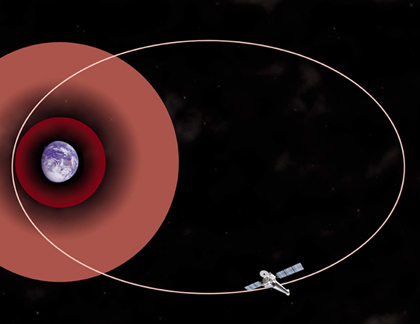 As with a great Thanksgiving dinner, it's all in the prep work. When the eclipses actually arrive, the team watches the spacecraft go into and come out of each eclipse, ensuring its safety. Given the preparation that goes into each eclipse season, the onboard emergency protection, and the eyes of our trained operators, the spacecraft, though without sunlight, is in good hands. Shortly following the final eclipse of the season, the spacecraft is reconfigured for nominal operations and the EPS engineer begins to analyze the eclipse data in more detail, preparing for the next, lengthy eclipse season, which will occur in the spring of 2010.

While I'm sure the spacecraft would much prefer to be kicked back in a recliner, enjoying the warmth of a fire, half-watching the holiday game in a tryptophan-induced coma, it will instead traverse through the first eclipse of its fall season, in a dutiful effort to bring us the best x-ray data imaginable.